Shadrach was mentioned many times in the History of Taunton, Massachusetts. He served as the town clerk for 35 years and was said to have had the finest penmanship. He was arrested at one point and thrown in prison for writing a position paper that disagreed with the Royal Government concerning taxation. In 1668, Shadrach, John Hathaway and others were proprietors of the "Taunton North Purchase" which had been made from the Wampanoag Indians. They are on record as selling two 100 acre plots of land to be used to start the "Chartley Iron Works", to James and Thomas Leonard. This iron works grew and later was known as the Leonard Works of Norton.

In order to trace the lineage, Shadrach's father, Samuel, was the son of Nicholas Wilbore, Jr.

Taunton, Bristol Co., MA, Householders, 1675 Extracted from "Our County & Its People, A Descriptive & Biographical Record of Bristol County, Massachusetts", by Alanson Borden, 1899, Page 261-262. "At the beginning of King Philip's war [1675] there were in Taunton ninety-six heads of families, a list of which is on record. They were as follows: #88 is Joseph Wilbore, and #99 is Shadrach Wilbore

Wyldbore is recorded in several spellings including Wildbore, Wildboar, Wildboer, Wyldbore, Wilber, Wilbor, and probably others, this is an English surname. It is of pre-7th century origins, and was originally a personal name "Wyld-bar"and does translate literally as - wild boar. This however did not refer to a persons attributes or lack of them, but was given in the period of history known as The Dark Ages, as a baptismal name of affection. The wild boar being held in high regard for its strength and ferocity, as was recognized in that it was one of the earliest of the heraldic charges which appeared officially upon a knights armour from about the year 1190. The name both as a personal name and later a surname seems to have been quite specific to the north country of England and particularly the counties of Yorkshire and Lancashire. This is quite appropriate given the long tradition of civil wars between the houses (families) of York and Lancaster. The first known recording is believed to be that of William Wyldbar, recorded in the Assize Court rolls of Lancashire in 1246. Another early recording and clearly one that is not related, is that of William Wyldbore in the register of the manor of Wakefield, Yorkshire, in 1307. Finally we have John Wylbor who may or may not have been related to William. He was recorded in the highly unpopular Poll Tax register for Yorkshire in 1379, although his address is not known.

It is believed that Shadrach along with his parents, Samuel and Anne, and his two surviving brothers, Samuel, Jr. and Joseph, (Arthur and William having died in infancy in England) sailed to New England in 1630 with the Winthrop Fleet; possibly on the Arabella.

The first five ships sailed April 8 from Yarmouth, Isle of Wight, and arrived at Salem, Massachusetts Bay, June 13. The other half of the fleet sailed in May and arrived in July, at various dates. About seven hundred passengers are presumed to have been on these ships.Wilbur-403 12:08, 18 July 2018 (UTC)

Page 192: Usurpation Papers. XLIV. Order for S. Wilbore's imprisonment. The paper subsequently spoken of, called in question the late Tax law. To the Sheriff of the County of Suffolk. Whereas Shadrack Wilbore, Town clerk of Taunton, hath lately in the name and with the consent of the said Town, written and published a certain scandalous, factious and seditious writing therein, very much reflecting upon and contemning the laws, authority and government of this his Majesty's Territory and Dominion of New England. The which writing, upon his examination before his Excellency in Council, he hath confessed and owned. These are, therefore, in his Majesty's name, to require and com- mand you to take into your custody, the body of the said Shadrack Wilbore, and him safely keep in his Majesty's jail, until he shall have answered for the said contempt and misdemeanor, and be from thence delivered by due course of his Majesty's Laws. Whereof fail not. And for so doing, this shall be your warrant. Dated in Boston, the 30th day of August, 1687. By order in Council. [Article 21st of the preceding papers, has but little variation from a similar one in oth vol, 2d series, commencing at p. 181 of our Collections. Still it is thought not amiss to have it, with this difference, as one among the present series of such documents.—Pub. Com.]

Is Shadrach your ancestor? Please don't go away!

ask our community of genealogists a question.
Sponsored Search by Ancestry.com
DNA
No known carriers of Shadrach's DNA have taken a DNA test. 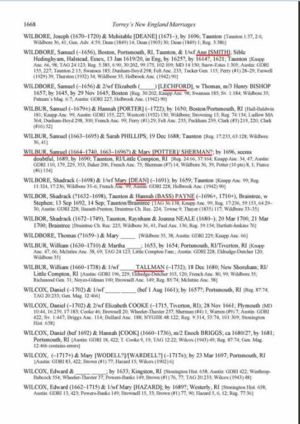