1911 June 15 Jack born to Constance (Venie) & George Seaborn Wilcox, at “Okinya”, Yarranabbe Rd., Darling Point, Sydney, NSW, Australia. 1912 "Okinya", the family home built for his father George Seaborn Wilcox in 1898, was extended. 1915 July 15 George Seaborn died. He shot himself and was found in the bedroom by Alan, Jacks elder brother. Jack was 4 years old. 1917 Sept 5 George senior, Jack's grand father, died in great pain. (Phlebitis in both legs.) 1920 Jack's Sister Rita went to China returned in 1921 and did medicine at Sydney Uni. 1926 Rita Wilcox awarded Bachelor of Medicine & Master of Surgery, 24th April, from Sydney University. 1916c Jack attended Edgecliff Primary School When he realised that the Roman Catholic children got Wednesday afternoons off he said that he was Liberal Catholic and was given the Wednesday afternoons off too. His mother, Venie, was a Theosophist and their church was called “Liberal Catholic”. 1919c Jack attended primary school as a boarder at Tudor House, Moss Vale. 1925c Jack attended high school as a boarder at The Kings School, Parramatta. 1929c Jack did 3 years of Engineering at Sydney University. 1932 July 17 Constance "Venie" Wilcox died in England. “Okinya” was let. 1932 Dec 6 Jack & Betty married. Jack bought land in Gordon on the Sydney North Shore and had a house built there. Venie (1934) and Sidney (Sid) (1936) were born there. 1937c Jack bought out “Okinya” from his brother and and 3 sisters at 1,000 pounds each. Jack & Bet moved to "Okinya". 1937 ACELEC (Alan Crook Electrical Company) formed. Jack formed a partnership with Alan Crook and later Greg Kater. The company later became Electrical Equipment of Australia. 1938 James (Jim) Seaborn was born at Okinya 1939 War in Europe 1941 War in the Pacific 1941 George Edward born at Okinya. Jack bought 2 houses in Leura, NSW in the Blue Mountains. Jack's family moved to Leura into the Gladstone Rd. house. Jack's sister Poppy used the Gordon Falls house for a short time. Jack sold a portion of the Gladstone Rd. property, which was more than 1 acre, to his close friend Greg Kater, who built a cottage there. Jack joined the army as a private and trained to be a lieutenant. First at Puckapunyal. Jack served in the Royal Australian Engineers and was a training officer at Penrith, NSW, and then served in New Guinea. While stationed at Penrith when Jack got leave he would go by train and at Wentworth Falls, the station before Leura. He would get in with the engine driver who would slow down at Gladstone Road, which ran down to the railway line, and Jack would jump off and walk up to the Leura home. Sid & Jim went to school at Leura Preparatory boys school and Venie went to Branksome girls school in Leura. 1945 End war in Europe May 1945 then in Pacific ? Jack's family moved back to “Okinya”, Darling Point, Sydney. 1946 Sid and Jim remained at boarding school at Leura until the end of the year. 1946 Sept 24Twins, Mymie Alice (later Isti) and Elizabeth Gai (Gai) born 1947 Sid and Jim were boarders at Tudor House school, Moss Vale. Venie was boarding at Frensham, Mittagong.

1947 Jack bought Beresford Electrics a small clock retail shop, specialising in electric & battery electric clock sales, clock repairs and clock imports. Jack imported the Macellan battery electric clock from England, one of the first lower priced battery electric clocks. At that time the quality of imported goods, soon after the war, was so poor that every single one of these clocks had to be tested before it could be sold. Jack did this at home at “Okinya” in a workshop he set up there. 1952 Coronation of Queen Elizabeth II, from Feb. 6 Bet & Jack invited guests to watch the coronation celebrations on Sydney Harbour from Okinya. 1953 Sept 4 “Okinya” burned down. It was school holidays and all the children were at home. Jack was burning off garden rubbish in the lower back garden when a spark lodged in a dry redwood shingle awning catching on fire and quickly spreading into the 50 year old dust filled roof. The heated dust exploded and the fire spread into the whole house at the same time. Although the fire brigade arrived promptly they had difficulty finding the water hydrant and were unable to save the house. The garage and old stables that were not attached to the house were not burnt. Jack and the boys camped in a tent in the garden and Bet and the girls stayed with relatives until Jack was able to rent a large house nearby to Okinya. Jack then converted the garage and stables into temporary accommodation for himself, Bet and Mymie & Gai. Sid & Jim used the former workshop at the back of Okinya as a bedroom. Venie boarded nearby. Jack then commenced rebuilding the Okinya house himself. The windows, doors and the roof were installed by contractors. The house was at lock up stage when Jack went to hospital. 1956 Jack was experiencing stomach pains and went for exploratory surgery. The advanced cancer in his stomach was inoperable and he died not long after. He died on August 9 1956 at age 45.

Personal knowledge, family records and accounts by his wife Betty.

ask our community of genealogists a question.
Sponsored Search by Ancestry.com
DNA Connections
It may be possible to confirm family relationships with Jack by comparing test results with other carriers of his Y-chromosome or his mother's mitochondrial DNA. However, there are no known yDNA or mtDNA test-takers in his direct paternal or maternal line. It is likely that these autosomal DNA test-takers will share some percentage (beta) of DNA with Jack:

Images: 1
Jack a few years before his passing 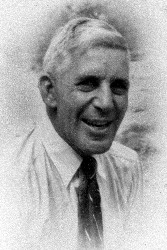