1873 George Seaborn was born in Cabin 2, just off Scilly Isles on the sailing ship "City of Adelaide” to George and Annie Wilcox who were returning to England from Australia. (“City of Adelaide” a 3 masted composite ship with iron frame and wooden planking, 178’ long sailed from London to Adelaide for 23 years taking passengers, but also high valued cargo such as wool. The trip usually took 90-100 days, but for some time she held the record for the fastest trip, being 65 days.) Georges birth was registered at Stepney, England, as all British children born at sea had to be registered there. It happened at sea because the ship was delayed, having to call at a different port on the way. George Seaborn returned to Adelaide, Australia on the same ship, aged one, with his elder brother, Sidney George and two older sisters, Edith and Nelly. The ship was stranded off Adelaide and all Passengers were floated ashore with their father, George, watching. As a boy he went to school in Adelaide, where they lived at “Eynesbury” in Lower Mitcham. “Eynesbury” was a big old house with a tower and 2 stories and with a lovely garden and orchard. 1889 George Seaborn, at age16, was put into the company, then George Wilcox & Co. In his 20's he was sent to the office in Sydney. He boarded at "Chollerton" (Malcolm's Folly) at Darling Point. 1894 The Wilcoxes established a Sydney office, and traded as George Wilcox and Co. previously William Mofflin & Co. In the same year Mr. George Wilcox retired, and gave his share of the business equally to his two sons, George Seaborn and Murray Wilcox, who had joined the Sydney staff. 1898 "Okinya" was built. This was the family Sydney Harbour waterfront home in Darling Point, Sydney, where George's 5 children were born. (Okinya, then owned by George's youngest son Jack, was burned down in 1953) 1899 George, age 27, married Constance Navena Welman (Venie) of Wagga (then living with her grandmother, Martha Susannah Scriven, at Potts Point, Sydney). (Martha Scriven had been formally married to a Mr. Bourke and a Mr. Thompson, both deceased.) They went to America for their honeymoon. George and his younger brother, Murray, were both in George Wilcox & Co. They ventured into a brick works at Bondi which was a failure because of the salty sand. 1907-8 They also ventured into a rural property called “Bogalana” not far from Yass near Wallendbean which was not a success and they lost money when they sold it. 1912 "Okinya" was extended. The company George Wilcox & Co. bought wool, skins & hides. Rabbit skins, possum skins, and Koala skins. (For mor detail about the company & Wilcox Moflin see the biography of George Wilcox, George Seaborn's father) 1913 Business was getting difficult and George had a nervous breakdown. He and Venie went to England to see relatives. On the way back war broke out. They returned in the ship "Beltana", (or "Mooltan"?) via Cape Horn, South Africa in a blacked out ship because of the war. 1914 George's condition got worse on his return and he was in and out of hospital (Venie had to have a nurse to be always with him). Apparently the continuous depression & worry of the business and the war was too much for him and he felt himself too big a burden to the family. 1915[1] George Seaborn shot himself and was found in the bedroom by Alan. His ashes were placed in the family vault at Waverley Cemetary, Watsons Bay. His youngest of 5 children, Jack, was 4 years old.

George was a splendid father and dearly loved by his wife Venie and all the children. He used to romp with us and have us to work at woodwork & photography with him. He built the “Cubby House” and swing in the lower back garden. About 1904 he bought a Renault car (reg. no. 257). His best friend was John Bainton who kept his launch next door at “Yatalunga” and they used to have great parties on the harbour and take us children. It was John Bampton who went to the U.S. and took George and Venie on their honymoon. John Bainton was instrumental in bringing out the Bell telephones and Standard Waygood Elevators.He was the first man to install a moving stairway at Mark Foys.

George Seaborn was very fond of birds and had a round avery in the back yard full of canaries and native finches. 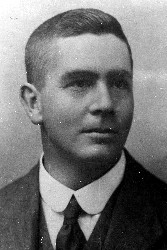 Newspaper Article on the death of George Seaborn Wilcox