This profile is part of the Franklin County, New York One Place Study.

Almanzo Wilder was born to James and Angeline Day Wilder on 13 February 1857, on the family farm in Burke, near Malone, New York.[1] Almanzo was the fifth of six children.

The family moved to Spring Valley, Minnesota, in 1875. Almanzo and his older brother Royal stayed in Malone to take care of the farm. Royal, Almanzo and his sister Eliza Jane then set out for DeSmet, South Dakota. They were among the first settlers in the town. Almanzo settled on his claim with the intent of farming wheat.

In 1883 Almanzo began courting Laura Ingalls who was ten years his junior. He started driving her the 12 miles between DeSmet and the town in which she was teaching. Three years later, on 25 August 1885, they were married.

The family returned to DeSmet in 1892. Almanzo worked as a carpenter and day laborer.

On 17 July 1894 the Wilder family left for Missouri traveling by covered wagon. They arrived on August 31st and bought forty acres of undeveloped land with a $100.00 down payment. Laura named it Rocky Ridge Farm.

Over the next 20 years they slowly built a home with ten rooms and expanded the farm to include 200 acres. They produced poultry, dairy items and fruit. They also kept Morgan horses and a large herd of cows and goats.

Almanzo Wilder died at the age of 92 on 23 October 1949, after suffering two heart attacks. He is buried in the Mansfield Cemetery in Mansfield, Missouri with his wife and daughter.


Memories: 1
Enter a personal reminiscence or story.
Anonymous P
In 1881 Almanzo is credited with saving his snowbound town of DeSmet from certain starvation by driving through a blizzard for wheat. There is some discrepancy of the distance ranging from 12-40 miles.

posted 21 Nov 2008 by Anonymous P
Login to add a memory.
Sponsored Search by Ancestry.com
DNA Connections
It may be possible to confirm family relationships with Almanzo by comparing test results with other carriers of his Y-chromosome or his mother's mitochondrial DNA. However, there are no known yDNA or mtDNA test-takers in his direct paternal or maternal line. It is likely that these autosomal DNA test-takers will share some percentage of DNA with Almanzo: 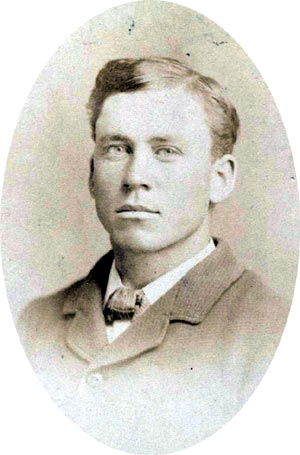 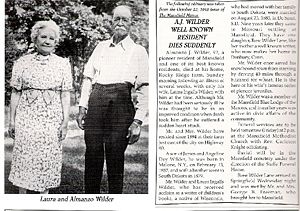 Leave a message for others who see this profile.
There are no comments yet.
Login to post a comment.
Beulah (Maltby) Cramer
His boyhood home in New York has been

recreated as a museum type place.