Frances Willard was a part of the Suffragette Movement.

Frances Elizabeth Caroline Willard (September 28, 1839 – February 17, 1898) was an American educator, temperance reformer, and women's suffragist. Her influence was instrumental in the passage of the Eighteenth (Prohibition) and Nineteenth (Women Suffrage) Amendments to the United States Constitution. Willard became the national president of Woman's Christian Temperance Union (WCTU) in 1879, and remained president for 19 years. She developed the slogan "Do everything" for the women of the WCTU to incite lobbying, petitioning, preaching, publication, and education. Her vision progressed to include federal aid to education, free school lunches, unions for workers, the eight-hour work day, work relief for the poor, municipal sanitation and boards of health, national transportation, strong anti-rape laws, and protections against child abuse

Willard was born to Josiah Flint Willard and Mary Thompson Hill Willard in Churchville, near Rochester, New York, but spent most of her childhood in Janesville, Wisconsin.

She moved to Evanston, Illinois when she was 18.[3] Willard's time at the Northwestern Female College led her to become a teacher and she held various teaching positions until she became the President of Evanston College for Ladies. She held this position on two separate occasions, once in 1871 and again in 1873. She was also the first Dean of Women for Northwestern University.

In the 1860s, Willard suffered a series of personal crises: both her father and her younger sister Mary died, her brother became an alcoholic, and Willard herself began to feel love for a woman who would ultimately go on to marry her brother.[4] Willard's family underwent financial difficulty due to her brother's excessive gambling and drinking, and Willard was unable to receive financial support from them. In 1869, Willard was involved in the founding of Evanston Ladies' College.

In 1874, Willard participated in the creation of the Woman's Christian Temperance Union (WCTU) where she was elected the first corresponding secretary.

Willard joined with Elziabeth Boynton Harbert, Mary Ellen West, Frances Conant and forty-three others in 1885 in the founding of the Illinois Woman's Press Association.[8]

As president of the WCTU, the crux of Willard’s argument for female suffrage was based on the platform of "Home Protection," which she described as "the movement...the object of which is to secure for all women above the age of twenty-one years the ballot as one means for the protection of their homes from the devastation caused by the legalized traffic in strong drink

Willard died of influenza at the Empire Hotel in New York City while preparing to set sail for a visit to England and France. She died quietly in her sleep.[15] She bequeathed her Evanston home to the WCTU and in 1965 it was elevated to the status of National Historic Landmark, the Frances Willard House. 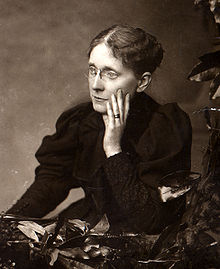 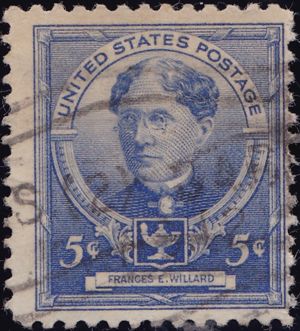 Frances is 20 degrees from Donald Howard, 14 degrees from Julia Howe and 16 degrees from Henry VIII of England on our single family tree. Login to find your connection.