Tennessee Williams was an American playwright and author of many stage classics, including The Glass Menagerie, A Streetcar Named Desire, and Cat on a Hot Tin Roof'." Along with Eugene O'Neill and Arthur Miller, he is considered to be among the three most prominent playwrights of 20th Century American drama. In 1979 he was inducted into the American Theater Hall of Fame.[1]

Tennessee Williams was born Thomas Lanier Williams III 26 March 1911 in Columbus, Mississippi, the son of Cornelius Williams and Edwina Dakin . His father, a traveling shoe salesman, was an alcoholic and frequently away from home. Tennessee lived with his mother and maternal grandparents, Rev. Walter Dakin, an Episcopal priest, and Rose Dakin, a music teacher, for the greater part of his formative years. The family lived in the church parsonage. Tennessee had two siblings, an older sister, Rose, and a younger brother Walter.[2]

From 1929 to 1931,[3] Tennessee attended the University of Missouri in Columbia, where he studied journalism and he began writing ... poetry, essays, short stories, and plays ... which he entered in writing contests. He later enrolled at Washington University in St. Louis, where he wrote his play Me, Vashya. After transferring to the University of Iowa, he finally graduated with a B.A. in English in 1938.[4] About this time, he began using the first name "Tennessee" as a professional name.[5]

His professional career began in the late 1930s, and he worked for Metro-Goldwyn-Mayer as a contract writer for six months. It was his play The Glass Menagerie, first produced in Chicago, and later on Broadway, which made him famous. Between 1948 and 1959, he was on a roll, with seven of his plays produced on Broadway: Summer and Smoke (1948), The Rose Tattoo (1951), Camino Real (1953), and Sweet Bird of Youth (1959).[6] By this time, he'd won two Pulitzer Prizes, three New York Drama Critics' Circle Wards, three Donaldson Awards, and a Tony Award.[7]

During the 1960s and 1970s, his career took a turn for the worst, and the plays he wrote during this time, eight in total, were all box office failures. This mirrored his personal life, where drug addiction and depression had taken hold.

His family and friends were the inspiration for some of his most famous characters. The most significant was Rose, his sister, who was the inspiration for the main character in The Glass Menagerie. Rose, who had been diagnosed with schizophrenia had received a lobotomy, requiring her to be placed in institutions for the remainder of her life. Tennessee was a loving brother, and provided for his sister's care for as long as she lived. Another inspiration as the Italian stage and screen actress Anna Magnani, who was Tennessee's friend for 24 years and who inspired both "The Rose Tattoo" ad "Orpheus Descending."[8]

Tennessee was gay, and he had several long-term relationships with men, including Pancho Rodríguez y González, from 1945 through 1947, and Frank Merlo, which lasted 14 years and was most likely the happiest and most stable period of Tennessee's life. [9]

His final years were spent coping with depression and drug abuse, and he never attained the success of his earlier career.

Tennessee died 25 February 1983 at the age of 71 in New York, an accidental death due to choking on a spay bottle cap he must have inhaled.[10] He was buried at the Calvary Cemetery and Mausoleum in Saint Louis, Missouri.[11][12]

He remains one of the most significant writers of our time, with his earlier plays produced all over the world. His work has also been adapted for the screen. His writing includes 112 credits from the 1940s through 2018.[13] An amazing life and contribution to the arts that will be felt for generations to come.

Pulitzer Prize winner Hilton Als, a writer for The New Yorker, wrote an insightful and comprehensive review of a recent William biography, "Tennessee Williams: Mad Pilgrimage of the Flesh," which covers not only Tennessee's work, but also his relationships with his family and friends. The review can be found here.[14]

Here's a review of Tennessee's memoirs, which were published in 1975, which provides a nice summary of the work.

Tennessee is a direct descendant of Valentine Sevier.

ask our community of genealogists a question.
Sponsored Search by Ancestry.com
DNA Connections
It may be possible to confirm family relationships with Thomas by comparing test results with other carriers of his ancestors' Y-chromosome or mitochondrial DNA. Y-chromosome DNA test-takers in his direct paternal line on WikiTree: 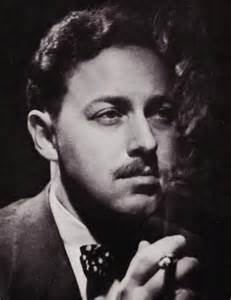 T.C. Justine Baker
Tennessee is also a direct descendant of Valentine Sevier. I made the correction of Francis wife being Isabel SEVIER (McCorkle) per our family book and research compiled in Sevier Family History by Bales & Madden. His ancestors should show accordingly now. Valentine was the father of the FIRST GOVERNOR OF TENNESSEE, John Sevier, Sr.

One photographer, Jan Eric Dean captured him in his early days of stage. I'll see if I can find the candid and humorous photo of him to add on here. Interesting as we are both Sevier descendants and had the same photographer in our younger days. -T.C. Justine Baker

Thomas is 20 degrees from Mary McCauley, 26 degrees from B. W. J. Molier and 14 degrees from Henry VIII of England on our single family tree. Login to find your connection.