Capt John Williams, the son of John and Anna Williams was born circa 1624 in England. He emigrated to Massachusetts with his parents as a child, and was in Scituate by 1632[1] [2]

In 1666, John married Elizabeth Lathrop[3], and had no children. According to the sources noted here, the couple lived apart for many years.

On June 5, 1666, “Elizabeth the wife of John Williams exhibited a complaint against her said husband… for many abusive carriages towards her both in word and deed by defaming her in rendering her to be a whore and psisting in his refusing to pforme marriage duty unto her… withheld nessesary comforts and coveniencyes… carryed bitterly towards her… endeavored to reproach, insnare, and betray her,” and John Williams “was at this Court put upon tryall by a jury of his equalls and a verdict brought against him and that they found her complaint to bee true or just.” Further, “The Court haveing seriously considered of the matter doe judge that it is not safe or convenient for her to live with her husband… alow her ten pounds yearly to maintaine her while shee thuse absent from him… and for that hee hath greatly defamed and otherwise abused his said wife… wee adjudge him to stand in the street or market place by the post with an inscription over him that may declare to the world his unworthy carriages… Att the earnest request of his wife this pte of the centence was remitted and not executed.”[4]

John Williams was accused of mistreatment and misuse on seperate occassions by John Barker, and Deborah Barker, being once discribed as “the most evil man in the world.” 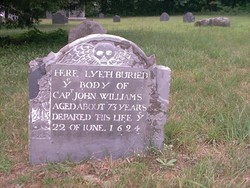