Leslie was born in Nebraska in 1959. His parents were Paul Williamson and Margaret Smith.

Leslie lived in various towns in Florida from 1985 to at least Oct 2001, then at some point moved to Semmes, Alabama.[1]

Is Leslie your relative? Please don't go away!

ask our community of genealogists a question.
Sponsored Search by Ancestry.com
DNA Connections
It may be possible to confirm family relationships with Leslie by comparing test results with other carriers of his Y-chromosome or his mother's mitochondrial DNA. Y-chromosome DNA test-takers in his direct paternal line on WikiTree: 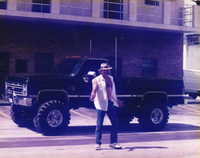 Leave a message for others who see this profile.
There are no comments yet.
Login to post a comment.
Richard Chalk Jr.
Les died unexpectedly on 5 March 2018 in Mobile, Alabama.
posted Jun 30, 2018 by Richard Chalk Jr.

Heather Husted
Hi Leslie, you uploaded a photograph to the profile of Anna Hendricksdotter Coleman

but she died in 1739 long before photography was invented. Did you mean to attach this image to someone else? Heather

You've been a member of WikiTree for about a week so I thought I would check in to see how it's going. The New Member How-Tos are for you to work at your own pace. If you had a chance to review any of it, was it helpful?

If you have questions about how WikiTree works, I'm here to help. Just click my name, then ask in the comment section of my page. I'll get back to you by the end of the day.

PS Did you discover that the surname tags on your profile are clickable links? Each will take you to a page of other people who research the surname and a bunch of links which might be helpful. You can add more tags, up to 20 total.

Thanks for taking the Pre-1700 Quiz! Pre-1700 ancestors are shared by many descendants,thus it is essential to coordinate with others. Review these How To #3 and the Project FAQ.

I recommend Virginia led by Liz Shifflett or US Southern Colonies Project led by Paula J or Mags Gaulden may fit your profiles.

or use the Pre-1700 Projects list for other possibilities.

After joining a project, please add a tag to your page to receive updates.

Karen Lowe
Welcome! You are now a full member and can add your family to the big tree.

Start with our New Member How-To pages. They will save you time, energy and frustration as you add your family profiles. And maybe say hello to Kitty Cooper Smith, our resident "got Smiths?" expert. :-)

We are so happy to have you here in the WikiTree community. Please let me know if you have any questions. I'm always happy to help!

p.s. Sometimes links don't work in emails. If that's happened to you, check the public comments on your profile as the links will work from there.

Just a note to say hi and to let you know that I'm available to answer questions about Wikitree. You can contact me by clicking the link to my name, then sending a private message or posting a comment on my profile page. Guy Constantineau ~ WikiTree Greeter

Leslie is 23 degrees from Wendy Taylor, 20 degrees from Christian VII af Danmark and 18 degrees from Henry VIII of England on our single family tree. Login to find your connection.