Doris is the son of Armon Wilson and Pauline Ross. He was adopted by Armon who raised him as his own child - and is the biological child of Pauline.

Doris grew up in Littig, TX before he left to fight in WWII. He registered for the WWII draft at age 21 - after he returned from working at Harrouwn Farm in Malaga, New Mexico (Eddy County) working ofr Jim Lopez.

He went to school at SCHOOL NAME(S) and graduated in YEAR OF GRADUATION.

Doris served in the United States Army, during World War II, for 4 years. Then he returned to Austin and was employed in various jobs, before working at the Texas State Capital for several years, and then continuing his career at Tracor Inc. until he retired.

Some of the things most important to Doris included playing dominoes, telling jokes, and watching the Westerns on TV. He also had a fare for cooking, and could cook anything. He enjoyed fun activities with his children, such a taking them to the kiddie movies on Saturday mornings after perparing pancakes and bacon before we left. Then when there was no movies for the week he would take us and all of the neighborhood children that could fit in our old station wagon to the park to swim. On summer vacations he would take us to Belton to stay the summer with his uncle (our great uncle) so we could get to know that side of the family. He made sure that his children had a wonderful childhood. HE ENJOYED LIFE AND NEVER NEVER MET A STRANGER...

Doris Wilson passed on April 22, 1991 from liver problems. He was buried in Austin, TX, in Cook-Walden cemetery.

Is Doris your relative? Please don't go away!

ask our community of genealogists a question.
Sponsored Search by Ancestry.com
DNA
No known carriers of Doris's DNA have taken a DNA test. 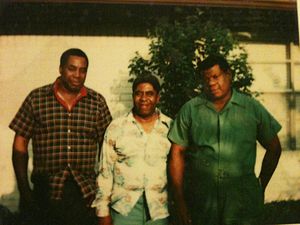