Moses was buried in the old Wing Cemetery at Wayne, Maine. When the family created the new Wing "Ring" cemetery adjacent to the original cemetery, they went to the old cemetery to re-inter family members in the new cemetery. However, when they went looking for Moses' remains, the skeleton they discovered was not his. (Moses lost a leg in the Revolutionary War, but the skeleton had both of its legs).

Served initially as a drummer:

"Tradition says, that after the battle of Lexington, young Moses Wing, barely sixteen years of age, left his father's house at Pocasset, and without the knowledge or consent of his parents, walked to Boston with the purpose of joining Washington's army.  His father followed and compelled his return, but later, the following January, he gave his consent, and Moses entered Captain Diamond Morton's company in a regiment or artillery commanded by Colonel Henry Knox, as a drummer. After the evacuation of Boston, he marched under Washington to New York, and at the battle of Flatbush, Long Island, was wounded and suffered the loss of his left leg [between the knee and thigh.]  He was honorably discharged form the army in November or December, the same year, at Fishkill, N.Y.  He then returned to his native town and began the study of medicine with one Dr. Brown, a regular practitioner, with the intention of engaging in civil practice, but in May or June, 1778, he again entered the service, this time in the practice of his profession.  He first served on the Continental sloop Providence, Captain John Rathbone, as surgeon's mate, Dr. Cook, chief surgeon.  They sailed from New Bedford.  In August, 1778, he served as surgeon on board the [privateer sloop Vagrant, commanded by Captain Maloon.  In October of the same year he served as surgeon on board the] armed brig, Stark, commanded by Captain Hubbard, and was discharged at Boston.  In June, 1779, he again entered a hospital at Boston and there served six months as surgeon's mate to Dr. John Warren, one of the most eminent of the Revolutionary surgeons.  [After leaving the service, he engaged in civil practice in the little town of Winthrop, Province of Maine, the first physician there located. Evidently he realized that the country needed his services for after a few months he again entered the service] There is an official record of Dr. Wing's service as follows:  "Moses Wing, doctor, Captain Samuel McCobb's regiment; regimental return dated Camp Coxes Head, June 27, 1781; also surgeon's mate, same regiment, entered service May 20, 1781; discharged Dec. 1, 1781; service six months ten days; Eastern Department; roll sworn to in Georgetown." [honorably discharged at Falmouth, ME] Vol. 14, "Lineage, D.A.R.," states that Moses was a drummer at 16 and served at the siege of Boston under Col. Henry Knox.  He lost his leg at the battle of Long Island.  Re-enlisted, 1778, as surgeon's mate and served on privateers until the close of the war; that he was a pensioner, and died at Wayne, Maine." Wing, Moses. Doctor, Col. Samuel McCobb's regt.; regimental return for provisions for 3 days, dated Camp Coxes Head, June 27, 1781; also, Surgeon's Mate, same regt.; entered service May 20, 1781; discharged Dec. 1, 1781; service, 6 mos. 10 days, in Eastern department; roll sworn to at Georgetown.

ask our community of genealogists a question.
Sponsored Search by Ancestry.com
DNA Connections
It may be possible to confirm family relationships with Moses by comparing test results with other carriers of his Y-chromosome or his mother's mitochondrial DNA. However, there are no known yDNA or mtDNA test-takers in his direct paternal or maternal line. It is likely that these autosomal DNA test-takers will share DNA with Moses: 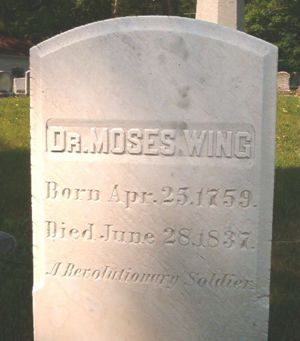 Leave a message for others who see this profile.
There are no comments yet.
Login to post a comment.
S (Hill) Willson
He was a staff officer serving Massachusetts during the revolutionary war. You can add the DAR template to his profile. He is ancestor # A128573. There is probably a NSSAR record as well so you could add that template as well as 1776 template to show he was in the military during the war.
posted Feb 20, 2016 by S (Hill) Willson

Peter (Frost) Gold
Was Moses Wing a Justice of the Peace in Wayne circa 1816? I have a Moses Wing performing the marriage of Richard Frost [Frost-3535] and Salome Perry [Perry-3810] according to his pension records.
posted Sep 09, 2015 by Peter (Frost) Gold

Moses is 18 degrees from Peter Roberts, 11 degrees from Emma Smith and 13 degrees from Henry VIII of England on our single family tree. Login to find your connection.