Gelene was born Dec. 29, 1924, in New Plymouth, Idaho, to Ernest and Emma Wing. Her father managed an orchard in Council, Idaho, where she was raised climbing trees and taught the values of integrity and kindness to others. She excelled in basketball and track at Council High School. Gelene attended the University of Idaho in 1942, where she met her future husband, Orvelle Konen, sitting behind her the first day of math class. He moved to sit beside her on the second day, successfully launching their first date. World War II changed the course of their lives. Orvelle joined the U.S. Navy while Gelene worked in the Boise Capitol building for university extension. They were married on April 16, 1945, in Lewiston. The couple relocated to San Francisco to prepare for his deployment in the Pacific.

After the war, the couple temporarily lived in a rustic log cabin at the J.F. Konen cattle ranch near Forest, Idaho. They later moved to Tammany to operate the expanding family farm, where they raised five children. Gelene was dedicated to her family and lifestyle, often cooking full-course meals for a harvest crew of eight to 10 workers. The children always had clothes from the latest Butterick patterns, and she taught many young 4-H women how to sew in a longtime teaching partnership with friend Jean Buchanan. Gelene's friendly smile and positive attitude made it hard for a person to refuse sitting at her kitchen table, even if just for a moment. Her flower gardens provided a welcome site at the farm driveway.

The family enjoyed travel, including many notable trips in the 1958 Mercury family station wagon. As the children left home and headed to college, Gelene and Orvelle planned their own special trips by air, sea and land. Gelene served as co-pilot while Orvelle flew, navigated and drove them throughout the Pacific Northwest and many of the remaining 50 states. Together, the couple finally navigated the Inside Passage to Alaska with their cabin cruiser known as "Agricola." After farming operations were passed on to their son, Robert, snowbird trips began to Arizona and Nevada.

Known to climb and prune trees well into her 70s, Gelene aged gracefully. After Orvelle's death, Gelene moved to the North Star Retirement Community in Coeur d'Alene, where she forged a wide range of dedicated friendships. She stayed physically and mentally sharp with daily walks, bingo, banana-grams and visitors. Visiting grandchildren were assured that pool and ping pong tables were just as much for the residents as visitors.

Gelene was preceded in death by her parents, Ernest and Emma Wing; her brother, Jack Wing; and her husband of 65 years, Orvelle Konen. Surviving Gelene are their children, John Konen and wife Gabriela of Spokane, Sharon Konen of San Diego, Carol Konen Church and husband Paul of Hayden, Idaho, Robert Konen and wife Molly, and Bruce Konen and wife Sally, all of Lewiston. She also leaves behind 12 grandchildren and 16 great-grandchildren.

Cremation has taken place under the care of Yates Funeral Home, and her ashes will be commingled with Orvelle's at the Lewis-Clark Memorial Gardens in Lewiston. No service will be held, at Gelene's request. Memorials may be made to Jackson's Pay It Forward Foundation in Lewiston. Remember her with a smile.

Is Gelene your relative? Please don't go away!

ask our community of genealogists a question.
Sponsored Search by Ancestry.com
DNA
No known carriers of Gelene's ancestors' DNA have taken a DNA test. 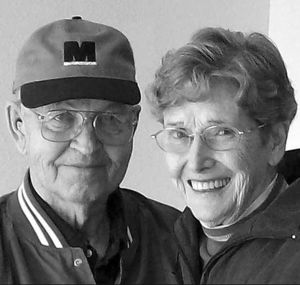 Gelene is 27 degrees from Danielle Liard, 23 degrees from Jack London and 22 degrees from Henry VIII of England on our single family tree. Login to find your connection.