Jesse Wing Jr. was born about 1797, the son of Jesse Wing Sr. and Mercy Swift. His date of birth cannot be established with absolute certainty; his tombstone says "1800", but two censuses both indicate 1797. It can be assumed that his year of birth is the one he personally stated twice as opposed to one that was chiseled in stone after his death.

All records indicate that his wife was Martha Browning of Athens, Maine, but his marriage certificate identifies his wife as "Polly Wing". This could be a nickname, or could be another person; it would be unusual to have a nickname on an official record, but the records in Maine at the time are spotty at best. Their marriage date is not given, but the intention date is 10 May 1823, which would be about the time he would have married; not giving time for another marriage. Martha was the widow of Joel Wing (the cousin of Jesse Wing Jr.) who had died earlier that same year, 1823. Jesse Wing passed away in 1861.

The children of Jesse Wing Jr. and Martha (Browning) Wing:

Is Jesse your ancestor? Please don't go away!

ask our community of genealogists a question.
Sponsored Search by Ancestry.com
DNA Connections
It may be possible to confirm family relationships with Jesse by comparing test results with other carriers of his Y-chromosome or his mother's mitochondrial DNA. However, there are no known yDNA or mtDNA test-takers in his direct paternal or maternal line. It is likely that these autosomal DNA test-takers will share DNA with Jesse: 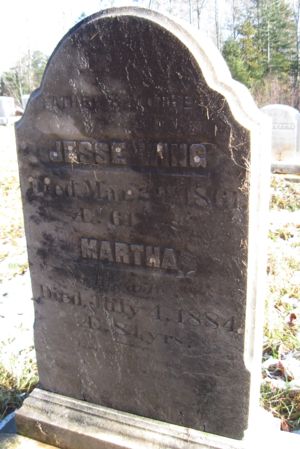 Jesse is 17 degrees from Danielle Liard, 13 degrees from Jack London and 14 degrees from Henry VIII of England on our single family tree. Login to find your connection.