Lillian married Charles Henry Hoard on Oct 3 1882 in Aurora IL. Charles was born February 13 1859 in Russell, NY and died Nov. 2 1933 in Plano IL. The 1865 census names her Orella; the 1870 and 1880 censuses name her Lilly / Lillie. She went by Lillian in later life. The records in the Wing Family of America have her confused, so they have her listed twice: once as Orilla and once as Lillian.

Lillian Wing was also known to Ruth Curtis as Grandma Hoard. She almost always had lived in Plano. Her husband owned a lot of stores and left her well to do when he died in this 60’s. Grandma Hoard could remember the soldiers returning from the Civil War. They never had children: they had adopted a girl named Juanita, who around age 40 found her biological father back and fell in love with him. She kept asking for and getting money from Grandma Hoard. It got depleted after a while. Grandma Hoard worked until she was in her 80’s, taking care of a mentally handicapped lady. She was very independent and lived to be 92.

From a cassette of information by Ruth Sluys in 2006: “We moved into the house that my father’s aunt owned (in Plano, IL) and he bought that house from my aunt, the old Aunt Lillian, or Grandma Hoard I always called her.” “My mother died when I was nine. And then we had house keepers because my father couldn’t take care of the house. First there was Betty, then Mrs. Klein. And then my Grandma Hoard came. She had come back from California visiting her adopted daughter Juanita who had moved to California with her birth father. Her birth father had come back, so she left Grandma Hoard and went to California with him. Then Grandma Hoard had a job taking care of a person who was mentally handicapped who lived in town – it was an older lady. And then my father asked if she could come over and take care of us. And she didn’t live in the house with us because we only had two bedrooms. She lived in the house down the street with Mrs. Franklin. So she’d come over every day and take care of the house for us. And the difference between her and Mrs. Klein was this: when she baked, if she made hot donuts, she wouldn’t let me cut them out. She would let me put them in the boiling oil. But now Grandma Hoard loved me. (note: mom once said that Grandma Hoard was more her grandmother than anyone else) And she would not let me put them in the boiling oil for fear I’d splash it on myself. But she would let me cut them out. And Grandma Hoard made the most delicious sugar cookies, and everybody wanted her sugar cookie recipe, and she tried to teach it to me once. But she didn’t have a recipe for it. I never did learn how to make her sugar cookies because she had to stand over me in order to make them.”

Is Lillian your ancestor? Please don't go away!

ask our community of genealogists a question.
Sponsored Search by Ancestry.com
DNA
No known carriers of Lillian's ancestors' DNA have taken a DNA test. 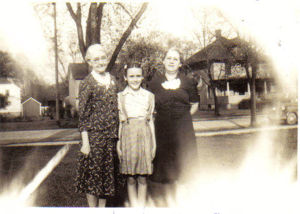 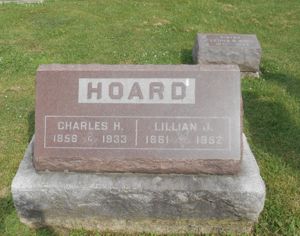 Lillian is 20 degrees from Danielle Liard, 16 degrees from Jack London and 15 degrees from Henry VIII of England on our single family tree. Login to find your connection.