Unmarried. She is listed as Iona in the 1880 census. In the New York 1925 census, Leona B Wing is listed in Sardinia, Erie, New York as someone’s partner. I could not access the original document to find out who she was living with. In the 1930 census she was living as a single woman in Buffalo, NY, in a house worth $5000, one of the most expensive houses in her area. She had one family boarding: Peter and Alice Haliteo, whose parents came from Romania. Peter was a stationary fireman for a forging company; Leona had no other work.

Is Leona your ancestor? Please don't go away!

ask our community of genealogists a question.
Sponsored Search by Ancestry.com
DNA
No known carriers of Leona's ancestors' DNA have taken a DNA test. 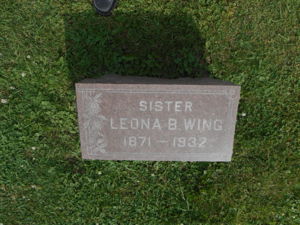 Leona is 20 degrees from Danielle Liard, 16 degrees from Jack London and 15 degrees from Henry VIII of England on our single family tree. Login to find your connection.