Chapter VIII (Page 76-79) CHARLES FOX WING NO MAN in Muhlenberg ever came in closer touch with a larger number of the citizens of the county than Charles Fox Wing. No man living in the county was more highly esteemed by his contemporaries. From 1798, when he first came to Muhlenberg, to 1861, when he died in Greenville, he had the respect and confidence of every man with whom he came in contact.

He was the youngest son of Barnabas Wing, who was for many years one of the wealthiest and most prominent men in New Bedford, Massachusetts, here he was extensively engaged in shipbuilding and various other enterprises. During the Revolution Barnabas Wing loaned money to the colony of Massachusetts Bay with which to carry on the War of Independence. During this struggle his home and all his other property was confiscated by the English, and at the close of the war he was a penniless man. It was during these trying times that Charles Fox Wing was born. About the year 1790 Barnabas Wing moved to Central Kentucky, and there, at the age of about fifty-seven, he began life anew. He and his wife had no desire to try to regain their lost fortune, but worked as best they could for the education of their younger children. They undoubtedly impressed upon their youngest son the sacredness and the cost of independence, for no man venerated the flag and its makers more than did Charles Fox Wing during all of his long life. Barnabas Wing moved to Greenville about 1809, and died there at the home of his son, October 4, 1815.

Charles Fox Wing was born in Massachusetts, according to one record, on January 25, 1779, and according to another, on January 15, 1780. In either case he was less than twenty-one years of age when, on May 28, 1799, he was appointed county clerk. He had previous to this time served in the office of Thomas Allen, of Mercer County, and Thomas Todd, Clerk of the House of Representatives. The experience gained under these two men undoubtedly made him far more competent to fill the position of county clerk than many men who had reached the age required by law. He served as clerk of the court of quarter sessions, and in March, 1803, when the circuit court was established, he became its clerk. He continued as clerk of the circuit and county courts until the adoption of the Third Constitution in 1850. He was then more than seventy years of age, and had devoted more than a half century to the writing and preserving of official records. When the Constitution of 1850 was adopted the office of circuit clerk and all county offices became elective. Captain Wing, at the urgent solicitation of the citizens of the county, became the candidate for clerk of the circuit court, and was elected without opposition ; his son, William H. C. Wing, who had assisted his father for many years, was elected county clerk.

When, in 1812, war was declared against England, no Muhlenberg man responded to the call to arms with greater enthusiasm or with more patriotic feeling than did Charles Fox Wing. He and Captain Lewis Kincheloe organized a company and awaited orders from the Governor. In the early part of September, 1813, their company marched to Newport, and on October 5th of the same year took part in the battle of the Thames. Wing was the lieutenant of this company, but on Captain Kincheloe 's death, which occurred before the battle, he was placed in command.

The details of Captain Wing's action in this short but decisive battle are, unfortunately, among the many other things that have passed away with the men and women who were familiar with them. The story of his connection with this battle has dwindled down to the statement that he was a hero at Thames, and saw Tecumseh after he was slain." This brief statement is probably founded on some act of heroism, for tradition says that all the veterans of 1812 not only referred to him as "a hero at Thames" but always gave him the seat of honor at their soldiers' reunions. Those who knew him best declare that his recollections of the part he took in the second war with England were among the many things that, in old age, gave him the satisfaction of feeling that he at least had tried to do his duty toward his county and his country. No man in the county or State was more devoted to the American flag or regarded it with more sacred feeling. Every year, on the Fourth of July, from 1799 to 1861, he hoisted Old Glory on a pole in front of the courthouse and also in front of his own home. This fact is referred to by James Weir in his recollections of Greenville as published in "Lonz Powers" and quoted in this volume. The Louisville Daily Journal, shortly after Captain Wing's death, commenting on his devotion to the flag, says: His love for the American flag has been a marked feature of his whole life. His devotion to the Star-spangled Banner was proverbial in all this region. It amounted to a passion. It was the one form in which, throughout his declining years, the rich and intense loyalty of his nature sought full expression. Every Fourth of July for the last quarter of a century and upwards, as regularly as the glorious anniversary dawned, he had raised the Stars and Stripes in his humble dooryard, and had kept them flying proudly until the close of day. The sight of the starry banner of the Republic, though rendered dim by the cloud of age, was to him a solace and an inspiration, bringing tears of mingled pride and joy to his failing eyes and smiles of hope to his sunken lips and his withered cheeks. He had been born under the American flag: he had lived under it and fought under it; and, now that he was dying under it, he asked, as his last request on earth, that ere he should be consigned to the grave he might be wrapped in the folds of that worshipped banner — that it might be his shroud in death as it had been his canopy through life. He died with this prayer on his lips.

This request was granted. His body was not only wrapped in the American flag, but in the very flag he had hoisted in front of the courthouse during the last ten or fifteen years of his life, and thus lowered into the grave. General Buckner and his army passed through Greenville September 26, 1861, the day after Captain Wing died. The General viewed the remains of his old and fatherly friend, commented on the befitting manner in which his body was wrapped in the Stars and Stripes, and then returned to the troops under his command. Such are the facts regarding this incident. I have verified this version by many men and women, among them General Buckner himself, who in August, 1912, fifty-one years after the incident occurred, still remembered all the circumstances connected with his call at the Wing home.

One of the other versions has it that General Buckner offered to bury Captain Wing with military honors, his offer being declined ; another has it that General Buckner, finding the body of Captain Wing wrapped in the Stars and Stripes, insisted on removing the Federal flag and burying the old patriot in the Confederate flag. A variety of other groundless statements can be traced to these two often heard but false stories.

On October 18, 1861, the Louisville Daily Journal published a brief sketch of Captain Wing, signed "T." From this I quote:

It was his rare merit to be all that he seemed to be, a distinction seldom attained by those who have figured on the public stage of life or have received its highest honors. He was the chief supporter of the little Presbyterian Church of his preference, and with unfailing constancy his venerable form was seen and his earnest voice heard whenever two or three were convened to worship God. For thirty years, with untiring patience, he presided over and sustained the Sunday-school. His departure makes a great void. Who can fill it ? A life of great beauty and excellence was closed by a most triumphant faith in the joys beyond the grave.

In 1806 Charles Fox Wing married Anna S., or "Nancy," Campbell, daughter of Colonel William Campbell and Tabitha A. (Russell) Campbell. Mrs. Wing was born March 13, 1788, came to Muhlenberg about eight years later, and died January 17, 1863. She was buried in Caney Station burying ground by the side of her husband. Captain Wing died in Greenville September 25, 1861, aged about eighty-one. The inscription on his tombstone, "Died September 15, 1861," is incorrect, and has been so recognized since the stone was erected in 1862. 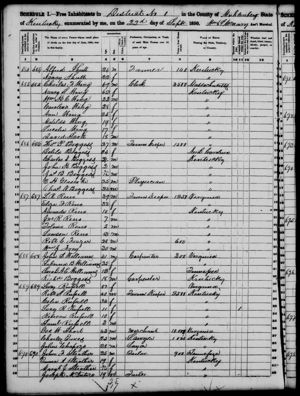 Charles is 22 degrees from Danielle Liard, 17 degrees from Jack London and 15 degrees from Henry VIII of England on our single family tree. Login to find your connection.