Stephen Wing aka Winge
Born about 6 Jan 1621 in Flushing, Zeeland

The Wing Family of America, Inc. declares the Wing brothers and their widowed mother emigrated with her father, Rev. Stephen Bachiler, on the William and Francis in 1632, however, they are not found in any contemporary record until 1637/8.

Stephen Wing was the son of Reverend John Wing and Deborah Bachiler.

He married (1) Osheah [Oseth] Dillingham. Stephen Wing was reprimanded in Sandwich court and fined because the birth of his eldest son Nathaniel was too soon after his marriage to Oseah.

Stephen Wing was born, probably at Flushing, Zeeland (now the Netherlands) circa 1621. He was called three years of age on 22 JUN 1624 when his mother, sister (Deborah) and Stephen received a license to travel from England to Zeeland to return home.

Stephen spent his early life in the cities of Flushing and The Hague in what is now the Netherlands. It is likely the Dutch society had a major influence in his life and lifestyle. One reason why English colonists moved to the New World from their previous abodes on the European continent was due to the fear that continental life was having a negative influence on the children's beliefs. The fear was they were losing their English identity.

Stephen lost his father and emigrated to New England shortly before he became a teenager. It is likely that in New England he was educated by his grandfather, Rev. Stephen Bachiler. Stephen was about 16 years old when the family moved to Sandwich. When it became time for Stephen to leave the home nest, and find a place of his own, he was either granted, or purchased, property on Spring Hill, East Sandwich.

The property known as, the Wing Fort House is a the oldest home in New England continuously owned by the same family. It was originally owned by Stephen Wing, purchased or built around the time of his first marriage in 1646. It was handed down through the generations until 1942 when Cora M. Wing sold it to the Wing Family of America, Inc. It is now a museum located at 69 Spring Hill Road, East Sandwich, Massachusetts and serves as the official headquarters of the WFA. [2] [3]

It is believed that at one time the "Fort House" had served as a Fort for protection from the Indians. An archaeological dig during the annual reunion in 2006 discovered remains of a large post, which possibly was part of a palisade fence. Some historians believe the fort was built when the town was settled in 1637. It was soon discovered that the Indians living on the Cape were friendly, and the fort was not needed, so it was granted to/purchased by Stephen. Other historians believe it was used as a Fort during King Philip's War (1675-1676). Still others feel it was never used as a fort.

Stephen married Osheah [Oseth] Dillingham in the fall of 1646. The time of his marriage has been determined by the fact he and his wife appeared in court in March 1646/7 and fined for having a child (Nathaniel) born "at an unseasonable time after their marriage." While Osheah had other children, only Nathaniel lived to reach maturity and Osheah herself died on 29 APR 1654. A little more than ten months later, Stephen was married to Sarah Briggs, the orphan daughter of John and Katherine Briggs of Sandwich.

Stephen, with his brother Daniel, embraced the new Quaker faith around 1658. He was repeatedly fined for his beliefs, but not to the same level that his brother faced. After the Quaker persecution ended Stephen became the Town Clerk for Sandwich. Stephen was probably the last surviving original settler of Sandwich. He died on 24 APR 1710. He almost certainly lies in an unmarked grave at the original Friends' Cemetery at Sandwich: Find A Grave: Memorial #105584287 Stephen Wing

Stephen Wing died testate. Will dated Dec. 2, 1700, proved July 13, 1710. Sons Ebenezer and Matthew executors; mentions sons Nathaniel, Elisha, John, Ebenzer, Matthew, daughters Sarah Gifford, Abigail and grandson Jeremiah Gifford. Inventory shows personal estate, £27, 3s. Stephen Wing "dyed the 24th day of Aprile, 1710." (7147) The three brothers have been characterized thusly: "John was the fearless practical pioneer; Daniel, the idealist and religionist; and Stephen, the scholar and man of affairs." The two latter helped to establish the first Friends' (otherwise Quakers') Meeting in America and it is claimed that this occurred on the farm of Daniel."(7148) For the subsequent thirty years of Stephen's live there is little to be found concerning his public life. He was probably one of the last, if not the very last, of the original settlers of Sandwich to survive. He lived 63 years in Sandwich after the date of the first settlement in 1637.

WILL: I, Stephen Wing of the Town of Sandwich in the County of Barnstable in New England, being age d and weak of body yet through ye mercy of God of Disposing mind and memory and calling to mind ye...uncertainly of this Transistory Life I am Desirous according to my Duty to set things in order before God shall Call me thence. And therefore Do make this my Last Will and Testament hereby Revoking and Depannelling all former Will and Wills by word or writing heretofore by me made and Do here by Constitute and Declare this to be my Last Will and Testament in manner and form following viz; my Desire is to commit my Soul to God in Jesus Christ who gave it and m y body to Decent Burial at our Friends Burying place at Spring Hill when God shall please to c all me Hence: And as Touching my Worldly Estate which God hath beyond my Deserts bestowed on my Will is to Dispose of it as followeth;
My Will is that all my Debts in Right or Conscience to any man Due Together with my funeral Charges shall be first Discharged by my Exectrshere after named in Convenient Time out of my estate.
Item. I Will and bequeath unto my Son Nathaniel Wing Ten pounds Item. I will and bequeath unto my son Elisha Wing Ten pounds Item. I will and bequeath unto my daughter Sarah Gifford fifty shilling Item. I will and bequeath unto my daughter Abigail Twenty Shilling Item. I will and bequeath unto my son John Wing my great Dripping pan and spitl. Item. I will and bequeath unto my Grandson Jeremiah Gifford Twenty Shillings and each Legacy t o be paid in Two years after my Decease. Finally my will is and I do hereby Constitute and appoint my Two sons viz: Ebenezer Wing and Matthew Wing joint Execrs to this my last will and Testament to administer upon my said Estate and to pay my Debts and Legacus according to this my will.
In witness whereof I have hereunto set my hand and seal this Second day of December Anna Dom 1700....Stephen Wing
Signed Sealed and declared to be his last will and testament in presence of STEPHE SKIFF, DANI EL ALLEN, JASHUB WING, WM BASSETT.
WILL: Barnstable, SS: On the 13th day of July 1710, then William Bassett, Daniel Allen & Jashub Wing whose names are sett to this will as witnesses yet before Barnabas Lothrop Esqr.Judge of Probate &c for the County of Barnstable Did Testify as in the presence of God that they did see Stephen Wing late of Sandwich now Deceased sign and seal this instrument & heard him own it to be his Last Will and Testament.
Attest: Wm. Bassett, Regtr.


Memories: 2
Enter a personal reminiscence or story.
Raymond Wing
young Stephen and Osheah "loved well but not wisely." They were probably married in the Fall of 1646, but had a child born in late winter 1646-7. For this carnal offense, they were fined by the Plymouth Court on 2 Mar 1646/7 for having a child "at an unseasonable time after their marriage."
posted 29 May 2011 by Raymond Wing
Raymond Wing
Stephen Wing & his brother Daniel were among the handful of Sandwich colonists who formed the first Society of Friends (Quaker) meeting in America in the late 1650s. This new religion was severely persecuted by the colonial government and the members endured disenfrancisement and repeated fines and imprisonment.
posted 29 May 2011 by Raymond Wing
Login to add a memory.
Is Stephen your ancestor? Please don't go away!

ask our community of genealogists a question.
Sponsored Search by Ancestry.com
DNA Connections
It may be possible to confirm family relationships with Stephen by comparing test results with other carriers of his Y-chromosome or his mother's mitochondrial DNA. However, there are no known yDNA or mtDNA test-takers in his direct paternal or maternal line. It is likely that these autosomal DNA test-takers will share DNA with Stephen: 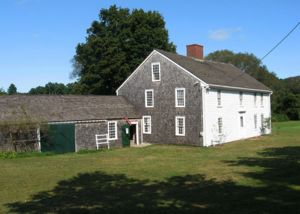 Stephen is 12 degrees from Frederick Douglass, 13 degrees from Margaret Summitt and 11 degrees from Henry VIII of England on our single family tree. Login to find your connection.