Yellow Thunder Winnebago was a Native American and member of the Ho-Chunk tribe.

The proper form of the name is Wakąjaziga, "Yellow Thunderbird," although the shortened name stuck in English. It is a Thunderbird Clan name, from Wakąjá, "Thunderbird"; zi, "yellow"; and -ga, a definite article suffix used in personal names.

He was a famous War Chief of the Hočąk (Winnebago) Nation. Moses Pauquette adds, "He was a fine looking Indian, tall, straight, and stately, but had an over weening love for fire-water, — his only vice.." The oft repeated claim that he lived to be a 120 years old is mythological (1 x 2 x 3 x 4 x 5 = 120). Jipson gives a sketch of him:

"This chieftain ... lived on the Fox River about five miles below Berlin
at the Yellow Banks. He was said to have been a man of great
responsibility among his people and an able counselor to all their
public affairs. In company with his wife, who was a daughter of White
Crow, and later called the 'Washington Woman,' he made a visit with
several numbers of his tribe to New York and Washington in 1828.
He signed the treaty of 1829. In 1837, in company with several young
men, he was persuaded to visit Washington and induced to sign the
treaty made in that year. But he found that the terms of the treaty
compelled him to go west of the Mississippi, he declared he would
not go. But in 1840, in company with Black Wolf, he was invited into
Fort Winnebago ostensibly to hold a council. When the gates were
shut on them they were seized and conveyed beyond the Mississippi.

But Yellow Thunder soon returned, and visiting the land office at
Mineral Point, he asked if Indians would be permitted to enter land.
In receiving an affirmative answer, he entered forty acres on the west
bank of the Wisconsin River. He is said to have built two log huts, and
to have cultivated five acres of this land, raising corn, beans and potatoes.
During his feasts about 1500 Indians usually gathered in his vicinity. In
1840, he was said to have had a summer village sixteen miles up the
river from Portage.

He sold his land before his death which occurred in 1874. It is said that
when he paid his taxes he placed in his pouch a kernel of corn for every
dollar paid, and when he sold his land he demanded a dollar for every
kernel. As he had been a devout Catholic his funeral services were
conducted according to the rites of that church. He was buried near his
homestead and near the grave of the Washington Woman and several
other members of his family."

"Captain William Powell had a trading post near the present site of Omro; and in the summer of 1844, the Winnebagoes were encamped, two hundred strong under old Yellow Thunder, at the outlet of Rush Lake."

"A large encampment of the Ho-chunga-rah [Hočągara] or Winnebago tribe, ... the camp of Yellow Thunder, [was] to the east of the present village of Onalaska." "The Winnebago Indians camped along Black river just above the village [of Onalaska] in 1850-60."

Pomeroy's Democrat announced, "Yellow Thunder, chief of the Winnebago tribe of Indians, recently died at Portage, Wisconsin, aged one hundred and ten years. It is a consolation to know that so far no Indian agent has lived to this age." His age was greatly exaggerated, as was typical of old people of that time.

Thank you Richard Dieterle for the research into and creation of this profile. See his contributions to this profile.

Is Yellow Thunder your ancestor? Please don't go away!

ask our community of genealogists a question.
Sponsored Search by Ancestry.com
DNA
No known carriers of Yellow Thunder's DNA have taken a DNA test. 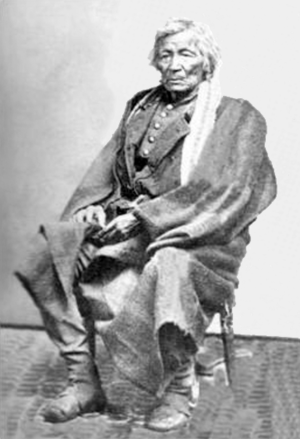 Yellow Thunder in The Hočąk Delegation to Governor Fairchild, 1866, by James F. Bodtker

The Hočąk Delegation to Governor Fairchild, 1866, by James F. Bodtker. Yellow Thunder is in the second row to the right. 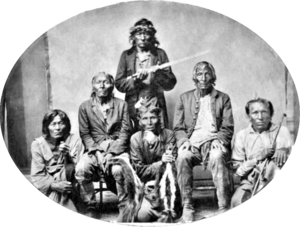 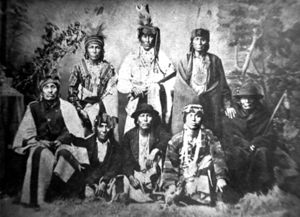 Wakąjaziga Seat in Front of His Lodge with Two Female Relatives, by Henry H. Bennett 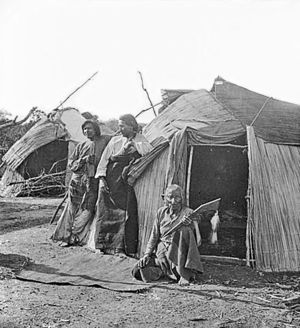 Richard Dieterle
So, you had these changes all along. I've changed last names many times before, but it had, as far as I could tell, no affect on the Change list. So you did something to sever me from the profile.

Now you're using two sets of pseudonyms as surnames: "Winnebago" and "Ho-Chunk". He's one, his wife the other. The Nebraska tribe uses "Winnebago," the Wisconsin tribe uses "Ho-Chunk". I stay out of their politics, as violence has been known to have been proffered in the past. But fools go where angels fear to tread. Why would some fool change the name of Yellow Thunder, from whose name the present surname of his male descendants derives? "Yellow Thunder" is their surname, so why can't it be his? Why do you have two competing name-sets going at the same time?

Are you setting up for an attempt to destroy my category Ho-Chunk. When I started, there were two families of this tribe, with 3 or 4 profiles. I have added nearly 500 profiles. But I'm sure that you and your confederates have a plan to erase this from any connection to me.

How did my Change contributions get erased in the first place? Why can't they be restored to the present file? How long will it be before the original file is erased?

You'd better get together with your lawyers and find out just what consequences might ensue from using under YOUR entire "Winnebago" category precisely a passage from my Encyclopedia's Introduction page without quotation marks and without attribution (again). Isn't that plagiarism? In fact, is erasing me from the Change file also plagiarism? Almost every word on the page is mine, and your Change page is the attribution. It seems that I'm very useful to you, but for some reason you wish to make sure that the future never hears of me.

Any time a last name at birth is changed, the wikitree system automatically:

a) creates a new profile b) merges the former named profile into the new one.

The change log from the previous profile comes along with the new profile; it's just a tad less easy to find, but as I said in my first response to you to the comment you left on my profile, the previous change log can always be found in the row that says (in the case of THIS profile):

In the actual change log, "Merged Yellow Thunder-1" is hyperlinked; when you click on that, it displays the contributions on the previous profile. Your contributions were never erased; they were always there.

I understand that you disagree with WikiTree's Native Americans project's naming conventions for indigenous people prior to their adoption of surnames. That was a decision made several years ago after much discussion with multiple stakeholders. As the project page says:

"WikiTree's underlying technology requires an entry in the "Last Name at Birth" field. It is the policy of WikiTree's Native Americans project to use this field to record the tribe or nation name for those individuals born before the introduction of surnames. For example, Pocahontas was a member of the Powhatan people. Her profile is Powhatan-3."

I am truly sorry with the upset that this has caused.

Kathie (Parks) Forbes
Richard, this is the profile that you created. The change log is still there. The Native American project is involved only because the profile was orphaned and the surname did not follow project guidelines. No one is taking your work or removing the categories you used.
posted Feb 26, 2021 by Kathie (Parks) Forbes

Richard Dieterle
Initial research?! I wrote the whole goddamned thing. You just changed the last name from Yellow Thunder to Winnebago, and in the process wiped out the entire history of my contributions. This is the case across a vast range of profiles, only in some everyone's last name is now "Ho-Chunk", but here, for some reason, a variant of the Menominee name Winni-bé-go is used. Perhaps you're favoring one "Winnebago" faction over another, or maybe you have a "thing" for Algonquians.
posted Feb 26, 2021 by Richard Dieterle

Jillaine Smith
I've added a link to the pre-merge contributions.

The narrative that you wrote says he was Winnebago. Please clarify his tribe affiliation.