Little Winneshiek was born in 1850. He is the son of Coming Thunder Winneshiek.

No-gin-kah is for Nójįga, "He who Hits a Tree," a personal name in the Thunderbird Clan. It refers to the propensity of the Thunderbirds to strike trees with their thunder weapons. (Radin) It derives from no, an older form of ną, "tree, wood"; jį, "to strike; to be hard"; and -ga, a definite article suffix used for personal names.

"No-gin-kah (meaning, Striking Tree and Younger Winneshiek) is the youngest son of Chief Winneshiek, or Coming Thunder. He is seventy years old and is still living in Wisconsin. He is more commonly known as Little Winneshiek. No-gin-kah says, 'John Winneshiek and I are the only sons of Chief Winneshiek living and his other descendants produced by our deceased brothers and sisters diverge into a very large family'." (Hexom, 47)

"He was a believer in the old Winnebago religion and is said to have mistrusted the whites. He had a small farm and during the summer months, could be seen in his field cultivating his crops, with a horse and cultivator and clad only in a blanket which reached to his knees." (Jipson, 222)

"He further states that, 'The medals issued to Winnebago chiefs by the United States Government are lost, the one described by Geo. W. Kingsley was lost by one of my elder brothers. I have only one medal in my possession, on which is engraved King George the 3d and Latin inscriptions [this medal, (with the exception of a slight variation in size) conforms to a description of the one issued by the British military authorities in 1778]'." (Hexom, 47; Jipson, 222)

Thank you Richard Dieterle for the initial research into and creation of this profile.

Is No-gin-kah your ancestor? Please don't go away!

ask our community of genealogists a question.
Sponsored Search by Ancestry.com
DNA
No known carriers of No-gin-kah's ancestors' DNA have taken a DNA test. 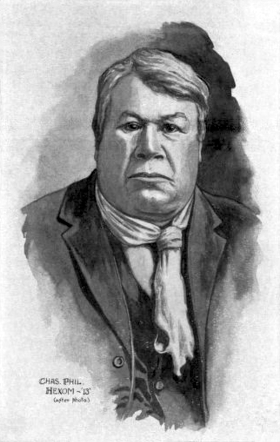 Little Winneshiek and His Wife Liddy 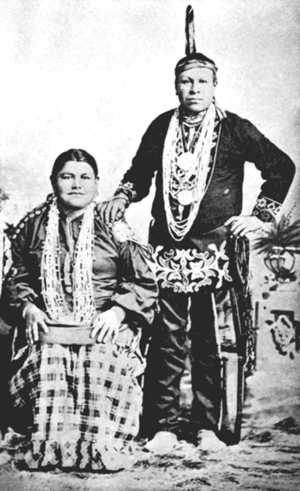