Gilbert Winslow, son of Edward and Magdalen (Oliver) Winslow was baptized at St. Peter's Church, Droitwich, Worcestershire, England, 29 October 1600, and born the Sunday before.[1][2][3] Gilbert was the brother of Edward Winslow, Governor of the Plymouth Colony.

"Gilbart" Winslow embarked on the Mayflower and made the journey to New England in 1620.[4] William Bradford's list of passengers includes Gilbert in a group of other men "Edmond Margeson, Peter Browne, Richard Britterige, Richard Clarke, Richard Gardenar, Gilbart Winslow," "strangers," who were not among the higher class, but not servants. In this case "strangers" are defined as those persons who were residents of England (not Leiden Church members) when they joined the Mayflower. They generally had some connection to a church member or to the merchants underwriting the voyage.[5]

Gilbert signed the "Mayflower Compact" in Nov 1620.[6] In the 1623 Plymouth land division "Gilbard Winslow" received one acre, on the south side of the brook, because he had been a Mayflower passenger.[7]

William Bradford in 1650/1 recorded that Gilbert Winslow lived in Plymouth for "divers years" before he "returned into England and died there".[4] Gilbert was not listed in the 1627 cattle division.[7]

Gilbert was buried 11 Oct 1631, in Ludlow, co. Salop (ie. Shropshire). His brother Edward, visiting at the time, administered his intestate estate, valued at £30 6s 6d. Records do not indicate a wife or children. [8]

1 Jun 1663, the Plymouth Court acknowledged that Gilbert Winslow, deceased, was a first-comer, and had a right to land as such and his heirs should look for a parcel of land and propose it for the court's approval.[9] The 1673 inventory of Kenelm Winslow lists "The one half of the portion of land Granted by the Court to him and his brother Josiah Winslow upon the accoumpt of thiere Bother Gilbert"[10] 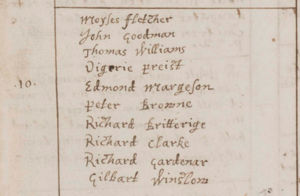