Josiah Winslow's Will and Death

Josiah Winslow's confusion over financial matters apparently held to the last, and the court made void his conditional bequest of house and land to his son Jonathan, as he had already given the property to him at his marriage. On 1 Mar 1674/75 the court ruled that because he had during his life already given his lands in Marshfield without restriction to his son Jonathan on the latter’s marriage to Ruth, the daughter of Mr. William Sergeant, but in his will left the same lands to Jonathan in fee tail (which basically meant that he could not sell them), that part of the will was void, but the rest would stand [4][5]

ask our community of genealogists a question.
Sponsored Search by Ancestry.com
DNA
No known carriers of Josiah's DNA have taken a DNA test. 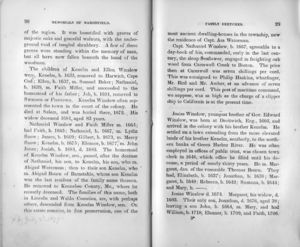 Leave a message for others who see this profile.
There are no comments yet.
Login to post a comment.
[Living Johnson]
Added image of pages 28 and 29 of the book Memorials of Marshfield and Guide Book to Its Localities at Green Harbor by Marcia A. Thomas, copyright 1854 by Dutton & Wentworth, Boston. Contains same info as Anderson's Great Migration without the copyright problem.
posted Jul 14, 2018 by [Living Johnson]