Anna Elisabeth Wittmann was born around 1863 in Grimm Russia. Her parents are unknown for now; see a discussion about who they may be in the Research Notes below. She married Johann Jakob Kaiser and the couple had at least seven documented children.

According to the 1897 Grimm census, Anna Elisabeth died before the census was taken leaving her husband Johann Jakob a widower. Her youngest child was 5 years old in 1897, so her death was between 1892 and 1897. Although her name is not specifically in the 1897 census, I am including it in brackets so an official connection to her children can be made.

She was the wife of Johann Jakob Kaiser, the head of the household.

There is an issue as to whether she was Jakob Kaiser's first or second wife. Here are the known facts:

The makes it clear that his mother Anna Elisabeth Wittman was alive in 1889. If his father was a widow in 1897, then she is the wife who was deceased by that year.

It is unknown who Ann Elisabeth Wittman's parents were, but there are 10 Wittmann males who were alive in 1857 who may be her father. All of them were direct descendants of Martin Wittman, the first Wittmann to immigrate to Grimm, Russia.

The next four were brothers, the sons of Johann Michael Wittmann who had passed away by 1857, so the men were living with their uncle Johannes Wittmann. The men are listed in the census as the sons of an unnamed brother of Johannes Wittmann. We know their father is Michael because brother Konrad Wittmann and his family are listed above these entries, and brother Johann Heinrich Wittmann died in 1824 at the age of 10. Brother Johann Michael Wittmann is the only one not listed in the 1857 census. He probably passed away before 1850 and his death was noted in the 1850 census.

While we may not yet be able to name Anna Elisabeth's father with certainty, we know who her grandparents were. The only line missing is that of her mother. If one of the older men were her father, we might be able to identify his wife, Anna's mother. If Anna's mother is not mentioned with either family in the 1857 census, her identity will probably remain unknown unless personal family records from a descendant reveal her full name or we gain access to Grimm church records.

According to the Obituary below, her son Alex Kaiser had a brother named Jacob Birkheim (spelled Bürkehim in Volga German records). He sounds like a step brother or half brother. Without ages it's difficult to determine more, but its possible that Anna Wittmann was married once before to a man with the surname Birkheim.

This is actually the obiturary for Anna Wittman Kaiser's son Alex Kaiser. It confirms the names of his parents and siblings.

ask our community of genealogists a question.
Sponsored Search by Ancestry.com
DNA
No known carriers of Anna's DNA have taken a DNA test. 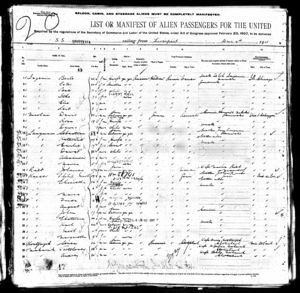