Thomas Woodford
Born before 1614 in England

His parents are unknown. A previous version of this profile claimed, without source, that he was the son of Joseph Woodford and Alice Upton. They have been detached.

By about 1636, Thomas married Mary Blott, daughter of Robert Blott.[1]

“3 March 1640: An order concerning graves: It is ordered that Thomas Woodford shall attend the making of graves for any corpses deceased and that no corpses shall be laid less than four feet deep. None that are above four year old shall be laid less than five feet deep. None that be above ten shall be laid less than six feet deep. He shall receive for giving notice, by ringing the bell, making the grave, and keeping it in comely repair, so that it may be known in future time where such graves have been made: for the lesser sort two shillings and six pense, for the middle sort three shillings, for the biggest sort three shillings six pense.” (spelling modernized and punctuation added for readability) [5] 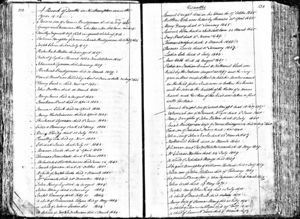 Leave a message for others who see this profile.
There are no comments yet.
Login to post a comment.
Judy (Howard) Shea
In the text, right above the monument with all the names on it, why does it start saying "Edward" instead of "Thomas?" This is for Thomas Woodford and I just skimmed through it to see if they used to call him "Edward" but I didn't see anything like that.
posted Nov 17, 2021 by Judy (Howard) Shea

Scott Carles
Judy, thanks for the catch. It's been fixed.
posted Nov 17, 2021 by Scott Carles
Jeannette (Say) Henry
Thank you for your work on this wiki for my 10x gr grandfather.

I am reading the name "Edward" where I believe it should be "Thomas" in the first two lines following the picture of the monument and the note regarding Thomas' appointment as keeper of the graves.

Anne B
There are a lot of children who were not listed by Anderson, not listed in Edward's will and no b/bpt records. Mary, Sarah, and Hannah are ok, the rest need to be disconnected. Objections?
posted Apr 14, 2020 by Anne B
Edward Kuntz
If as the body of the profile states Thomas Woodford's "parents are unknown. Joseph Woodford and Alice Upton are speculative" why make the connection on the tree without any support or documentation? Having spent countless hours attempting to find any source of such a relationship, it is frustrating to see his "speculative" parents legitimized without any evidence other than such speculation. It degrades the integrity of process.
posted Apr 14, 2020 by Edward Kuntz
edited Apr 14, 2020 by Edward Kuntz

Anne B
Thanks Edward

I am rewriting this biography and will disconnect the parents. Objections to disconnecting?

Jillaine Smith
Edward, thanks for catching this. I've detached the parents and added links in the profile. This profile could use some cleanup. It would be helpful to add a research notes section that summarizes attempts to identify his parents so that others don't spend countless hours trying to do so. The citations could Aliso use some cleanup.
posted Apr 14, 2020 by Jillaine Smith

Marriage in Roxbury not sourced.