Mary Johnson was born in 1858 in Toronto, Ontario, Canada. She was born like any other baby. Soon, it was noticed that she was different. She had a lower, deeper voice. Her face started to look more male than female and she started getting uncontrollable facial hair at a very young age.

Also at a very young age, her mother passed away, so it was just her and her father. He passed away when she was only 20 years old, leaving her on her own and alone. She decided she did not want to stay in Canada so she crossed the border to the United States and settled in California. This is the story that was told to Ellis Island in 1908.

The records we have found that seem to be for Frank Woodhull paints a very different story. Why were he and Josie changing info and flat out lying about so much?

By September 1887 she/he had found someone and fell in love. She had changed her name by this point to Frank Woodhull.

1900 finds Frank and Josie living in Precinct 5 South Town Chicago City Ward 4, Cook, Illinois. They have been married 13 years and have no children. Living with them is Josie's brother Ira.[3]

In 1908, knowing his ancestors had come from England, he wanted to go see where his people had lived. He packed and went to England for a couple months. Despite living in the United States for 30 years he had never become a citizen. Upon heading back he decided to go through Ellis Island and finally become a citizen. [4][5]

Upon arriving he had to go with the others through the medical evaluation. To the medical staff, he seemed slight and they took him aside to check for Tuberculosis. When they got to him to start the tests, he knew he had to "come clean". He told them his story. He was checked and found to have a clean bill of health. His finances were checked as usual for immigrants. It was determined that he would not be a burden on the government so that was good. They then had not decided, despite having lived in the country for 30 years, what he would be allowed to do. They could not decide where to house him for the night so they had to put him in his own private room.

The certificate of her immigration says: That her first name was Mary and last name was Johnson. She was of Canada, English, nationality and her last place of residence was London, England. She was 50 years of age at arrival on October 4th, 1908. She was a single female. The port she departed from was Southampton and she was on the ship named New York. The manifest line number she was listed on was 0017.[6][7]

By 1910, she has changed her name back to Frank Woodhull and is found in Chenoa, McLean, Illinois with Josie. They have adopted a daughter, Maizie F, and she is living with them.[19]

In 1920 he and Josie have moved to Cordova, Rock Island, Illinois. They own their own home. Archie, Josie's brother, is living with them at this time.[20]

1930 has them living still in Cordova, Rock Island, Illinois. It is clear that Maizie has married and had at least one child as Frank and Josie have their grandson William F Carsell staying with them.[21]

Frank passed away 1936. He was buried in Cordova Cemetery, Cordova, Rock Island, Illinois.[22] 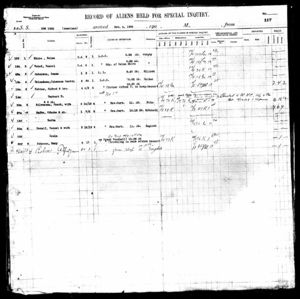 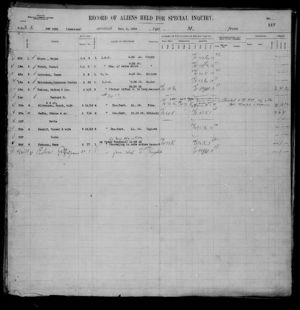 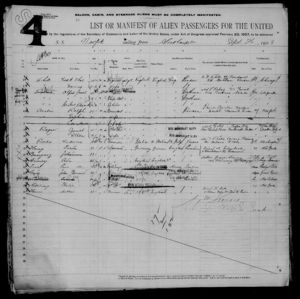