John married Sarah Page, daughter of Nehemiah Page and Mary True. Captain John Woodman and Sarah Page lived in 1764 at New Gloucester, Cumberland County, Maine, where he was a housewright and a farmer. He became a leader of a group of townsmen who objected to continued use of their tax money to support an orthodox Congregationalist minister. This was finally settled in 1790 by an act of the Massachusetts General Court. At this time, he and 72 others were incorporated into the Baptist Religious Society of New Gloucester and Gray. While not an ordained minister, John often preached in New Gloucester and near by towns. He was a veteran of the Revolutionary War. Captain John Woodman served about 1777 as on War Committees in New Gloucester, Maine.

Thanks to Greg Rose for starting this profile. Click the Changes tab for the details of contributions by Greg and others. 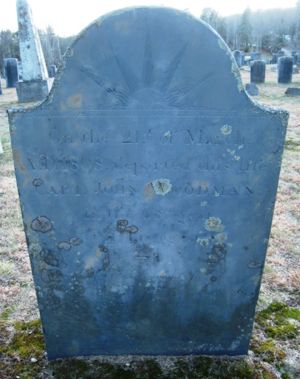