This profile is part of the Woods Name Study.

Notes from the newspaper article found at the Ottawa Archives: Trial of Joseph Meagher Sept 17 1879. On March 25 1879, the prisoner Joseph Meagher and his brother James Meagher along with William Connick were drinking at Carroll's tavern. They went outside and began fighting. Connick was stabbed outside - a knife was used by Joseph Meagher without warning - and died two days later. James Meagher left the country and Joseph Meagher was accused. There were several witnesses for the defense and the prosecution. The verdict of the trial was manslaughter. While the judge was delivering his verdict Meagher and his family twice interrupted the judge and His Honor said he was sorry to see him hardened instead of humbled at his crime. He was given a sentence of seven years hard labor. The prisoner was cool and unconcerned as he was led away.

Some of the witnesses were James Woods, Mary Carol, Alice Richardson and John Connick.

James and Mary married possibly in 1880.

James and his son were known to have built many houses in Campbellton after the fire.

According to Catherine Condron's obituary (James' sister) in 1920, only her brother Patrick and her step-son William Condron survived her.

No more info is currently available for James Woods. Can you add to his biography?

Is Jim your ancestor? Please don't go away! 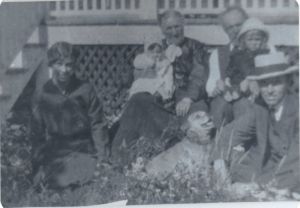