Granville Tailer Woods was an American inventor who held more than fifty patents.[1]

Granville T. Woods was born free in Columbus, Ohio, on 23 April 1856. He was the son of Tailer Woods and Martha Woods. According to a newspaper article from 1892, his parents were free Black people of Australia and moved to the United States while he was still a young child. (There seems to be little evidence of this.)[2] He attended school until age ten, when he was placed in a machine shop to be trained as a machinist and blacksmith. Meanwhile, he continued his education by attending night school.[3]

In 1872, he went west and obtained work as a fireman and later as an engineer on an Iron Mountain Railroad in Missouri. In his spare time he studied electricity. In December 1874 he moved to Springfield, Illinois, where he worked in a rolling mill, until early 1876, when he went east to begin two years of college study in mechanical and electrical engineering, while also working in a machine shop. Beginning in 1878 he spent two years at sea as an engineer on a British steamship. During 1880 he handled a locomotive on the D & S Railroad. [3]

In the 1880s he established a factory in Cincinnati, Ohio, for the manufacture of telephone, telegraph, and electrical instruments.[3]

One of his most significant inventions was a system intended for the engineer of a train to know how close he was to other trains. This prevented accidents and collisions between trains. He also invented the induction telegraph system, it allowed messages to be sent to and from trains, which also help prevent collision.

He and his brother organized Woods Electrical Company. The company prospered, as he was successful in selling his invention to some of the country's largest corporations. There were problems with train telegraphic equipment, but he later invented a train telegraph that did not depend on contact between the moving train and the conducting wire.

ask our community of genealogists a question.
Sponsored Search by Ancestry.com
DNA
No known carriers of Granville's ancestors' DNA have taken a DNA test. 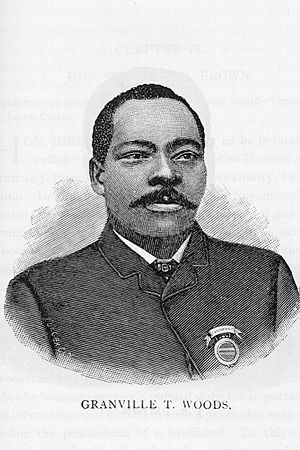 Leave a message for others who see this profile.
There are no comments yet.
Login to post a comment.
alexis whitfield
1.Bellis, Mary. "Granville T Woods 1856-1910." Biography of a Black Edison n. pag. Web. 28 Oct 2009. <http://inventors.about.com/od/wstartinventors/a/GranvilleTWoods.htm>