Transcribed from: Elba, Genesee County, New York: Historical and Genealogical Notes compiled by Howard Elmer Staples; 1940 [Copy furnished by Joyce Belgake]. Page 17: "Woodworth, Charles First Justice of Peace and First Assessor." page 18 "The records for that year of 1820 show that there were 118 men in the town "of sufficient ability and understanding to serve as jurors," and that the vote for Governor of New York State gave DeWitt Clinton 138 votes and Daniel D. Tompkins 28. It was not until April 11, 1842 when the census of Elba shows a population of approximately 1,500 that Oakfield, which had been know as Caryville, was erected, leaving Elba about six miles square in size. Elba's village plot was taken from farming lands originally of Asa Babcock, John Willis, Charles Woodworth and Thomas Davis. Babcock and Davis settled in 1817 and the remaining portions were purchased from their descendants. The first settlement in the town was made at Daw's Corners in 1801 by Samuel and Amos Ranger who came from Vermont. Samuel Clark from Massachusetts and his son Samuel, settled in 1802, and Samuel Hall from Seneca County NY and John Young came soon after and located near Pine Hill. [Mr. Young and his wife arrived at the Pinery, or Pine Hill, in 1803 after a fairly excitable trip from their previous home in Virginia. Traveling on horseback, and so carrying but few provisions and little equipment, they had found no one to offer them cordial hospitality as was the wont in those days to every traveler. They had stopped in Stafford at the Transit storehouse where they obtained a large cotton bag of Mr. Brisbane, which they filled with cat-tail flag and used for a bed. James Brisbane was the first merchant on the Holland Purchase, having located in Stafford on the Transit in 1796. On arriving at Pine Hill, the Youngs fashioned a rude hut from saplings and hides and set about to clear a space for a garden. Mrs. Young, who survived her husband by many years related in a letter to relatives in Virginia of many of their experiences and some of the tribulations they encountered]. Most of the early settlers who arrived between 1800 and 1820 bought their land from the Holland Land Company. The first white child born there was Betsey White in 1802."

Burial: Red brick Cemetery on Highway 60 or also called Homer road, about two miles South West of Concord, Jackson Co. Michigan. I have been to the cemetery (a farmer across from the cemetery has been keeping it up as much as he can on his own, otherwise it would all be overgrown with brush, etc.) and found Charles and his 1st wife Desire's tombstones, which were in very good condition. Charles according to land records, had this place set aside for a burying place when he sold his land. Desire his wife used to look out on that spot from her window in their house and told her husband that she wanted to be buried there when she died, and she was." "Died 08 Sep, 1836 aged 45 years. The first burial in the Red Brick Cemetery. The date of her death also appears in Jackson Co. Mich. Cemetery Records, Lansing State Library."

"State of Michigan } "I Charles Woodworth Of the Said County of Jackson being County of Jackson} duly Sworn Do Dispose and say that I am well acquainted with Swift Woodworth the person named in the foregoing application and that he is the identical Swift Woodworth therein mentioned and further that I have been personally acquainted with the said Swift Woodworth and have known him for the Space of a term of Forty five Years last March(?), and that the facts and Statements by him made in the foregoing application as to his residence are true according to the best of my Knowledge and belief. Charles Woodworth Sworn and subscribed before me this Thirteenth Day of May A.D. 1837 Isaac Vanderpol Justice of the Peace"

"The first time we visited the cemetery on Homer road it was very difficult to walk into it with all the under growth, but we found Charles Woodworth's grave but did not find Desire's stone. The next time we went to Michigan we figured it would be a whole lot worse, but it really was being cleaned up, a lot of the under growth was gone and one could walk around good. We talked to a Mr. Grundeman a neighbor, (my Aunt had been writing him for a couple of years) he told us that he had been working and cleaning up the cemetery all on his own and that he would like to see a cyclone fence all around it eventually. While cleaning the cemetery he found Desire's stone face down in the under growth, my husband helped him lift it up so I could get a picture, then laid it down to protect the face of the stone until he could put it where it belonged. He showed us the farm house that is still standing where Charles and Desire lived...... I think I will enclose the copy of a letter that Grundeman wrote to my Aunt..."

ask our community of genealogists a question.
Sponsored Search by Ancestry.com
DNA Connections
It may be possible to confirm family relationships with Charles by comparing test results with other carriers of his Y-chromosome or his mother's mitochondrial DNA. Y-chromosome DNA test-takers in his direct paternal line on WikiTree: It is likely that these autosomal DNA test-takers will share some percentage of DNA with Charles: 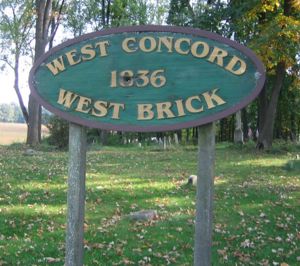 Leave a message for others who see this profile.
There are no comments yet.
Login to post a comment.
Bob Tonsmeire
Woodworth-1749 and Woodworth-763 appear to represent the same person because: same name, same dates, similar father, similar son
posted Apr 27, 2018 by Bob Tonsmeire