Elijah, the son of Samuel Wright and Annie (Loomis) Wright was born August 13, 1730. His birth is recorded in the Lebanon Vital Records Vol. 1 p. 329.

He married Temperance Waters on August 10, 1753. The marriage was recorded in the Hebron Vital Records.

Elijah Wright died at Coventry Connecticut, December 23, 1802 in 73rd year of his age. He was buried in the Silver Street Cemetery. The cemetery inscription is part of the Hale Collection.

About 1762 to 1764 Elijah wright purchased a mill and moved to Coventry.

Elijah and his eldest son Elijah, Jr. marched to the Lexington Alarm in April, 1775. His youngest son Roswell was present at the battle of Yorktown.

ask our community of genealogists a question.
Sponsored Search by Ancestry.com
DNA Connections
It may be possible to confirm family relationships with Elijah by comparing test results with other carriers of his Y-chromosome or his mother's mitochondrial DNA. However, there are no known yDNA or mtDNA test-takers in his direct paternal or maternal line. It is likely that these autosomal DNA test-takers will share some percentage of DNA with Elijah: 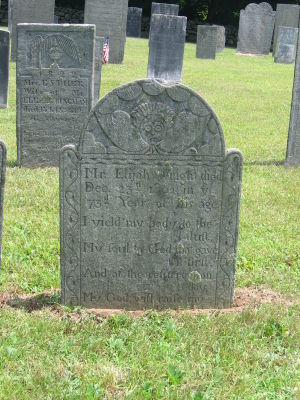