On Tuesday, 29 Feb 1944, in Richmond, Virginia, Violet and George divorced. At the time of the divorce there were 9 dependent children.

On Saturday, 4 Jan 1969, in Richmond, Virginia, Violet O'Dell Wright Hepner Beck Duncan died. She was 58 years old. Her remains were buried in Maury Cemetery, Richmond, Virginia. A description of the cemetery and grave site may be accessed here Find A Grave: Memorial #48829491;

Frederick John Beck III, 62, of Chesterfield, passed away on Thursday October 23, 2008. He was the son of the late Frederick John Beck Jr. and Violet Wright Duncan. Mr. Beck was a U.S. Army veteran and an active member of the Gill Grove Baptist Church. He is survived by his wife of 41 years, Katie Beck; a son and daughter-in-law, Fred and June Beck of Mechanicsville, daughter and son-in-law, Heather and Jason Barrett of Chesterfield; his beloved grandchildren, Courtney, Lauren, and Kyle Beck of Mechanicsville, Justin and Coalson Barrett of Chesterfield; sisters, Elizabeth Litton of Chesterfield and Betty Clark of Ohio. A funeral service will take place 11:00 a.m. on Monday, October 27, 2008 at Gill Grove Baptist Church, 10726 River Road, Chesterfield, Virginia 23838 with the Reverend John Brothers officiating. Interment will follow at the church cemetery. The family will receive friends from 4 to 7 p.m. Saturday, October 25, 2008 (tonight) at the Colonial Heights chapel of the E. Alvin Small Funeral Homes & Crematory, 2033 Boulevard. Flowers are welcome or memorial donations may be made to the Family Life Center at the Church.

Is Violet your ancestor? Please don't go away!

ask our community of genealogists a question.
Sponsored Search by Ancestry.com
DNA
No known carriers of Violet's ancestors' DNA have taken a DNA test. 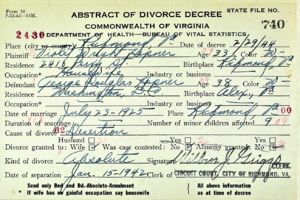 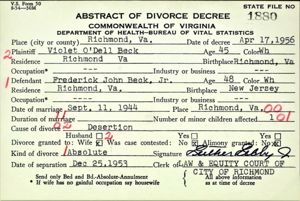 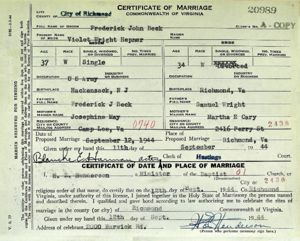 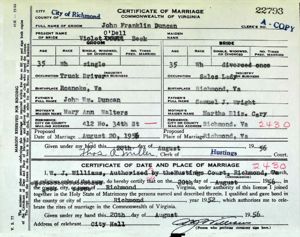