Thomas Wright
Born about 1849 in Liverpool

Birth Thomas was born around 1849 to father Thomas a Paper Hanger.

Marriage On 30 September 1871 Thomas marries Fanny Barlow. Thomas is now 22 and still living at Booth Street and Fanny is 21, has no occupation and was living at 11 Hill Street, Hulme. Her father is named as Richard Barlow, a Watch Maker. [2] [3]

27 Sept 1886 Thomas is named as father to Walter Arthur and William Henry who were then admitted to the Ardwick Industrial School. He was then living at 17 Billington Street, Clarenden Road, Oxford Street, Manchester. See image.

Research Notes Found no definate evidence after this time. He died before 1901 when son Walter married. It's possible he was in the Workhouse or even Prison for some of this time. There is evidence of other children Frederick 1872, Alfred 1886 and Herbert 1890, but needs further research. 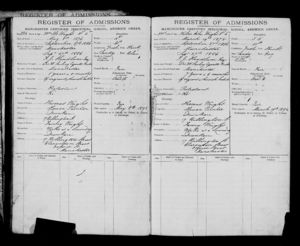