Sir Thomas "The Rebel, The Younger" Wyatt
Born about 1522 in Kent, England

Thomas Wyatt is in a badged trail to surety baron William Malet. (see text below).

Thomas Wyatt's level of education is unknown, but he was thought to be knowledgeable about classical military authorities. It is also known that his father had recommended that he study moral philosophy[2] as evidenced in a letter from father to son.[3]

Thomas was a soldier and was closely associated with Henry Howard, Earl of Surrey. In London in 1543, Thomas was arrested for rioting (in a late-night rampage through the city with Surrey and William Pickering) and for eating meat on Fridays and fast days. For this, he spent a month in the Tower of London.[2][3]

On 11 November 1550, Thomas was appointed to join negotiations with the French over boundaries at Calais and to advise the deputy and council of Calais.[3]

Thomas had inherited a large estate from his father, who died in 1542.[3] However, his father left many debts and, in 1543, Thomas sold a portion of his estates. The sale may have put him in disfavor with his tenants and neighbors, as his park at Boxley was one of the targets of anti-enclosure rioters in 1549.[2] Thomas led the Kentish gentry in the suppression of the disorders.[3]

In June 1550, Thomas was granted the manor at Maidstone, Kent, where his father had been steward.[3]

In 1537, Sir Thomas Wyatt married Jane Haute, daughter and co-heiress of Sir William Haute (or Hawte) of Bishopsbourne, Kent,[2][3] by Mary Guildford.[1][4] They had six sons and four daughters:[3]

According to Loades, Thomas had seven children, of which five were living in 1555. He names Henry, Charles, Arthur, George, Jane and Anne, above, and lists another daughter, Mary, who died without issue.[5]

It is thought that Thomas had not supported Mary I's accession in 1553 and, as possible supporter of Lady Jane Gray and close associate of her father, the Duke of Suffolk, he was not a friend of the new regime. However, by 19 July 1553, he had proclaimed her queen.[3] When rumors circulated of the possible marriage of Mary and King Philip of Spain, there was much opposition and Thomas was among those most vehemently opposed.

The marriage was announced on 15 January 1554, and Thomas issued a proclamation ten days later, calling on the people of Kent to rise with him "to save England from the foreigners and the Queen from her advisors".[3] His Kentish troops entered London on 7 February 1554, but he had no support there.[2] At some point the rebellion disintegrated and Thomas was asked to surrender. He complied and was taken to the Tower.[2]

Thomas' arraignment was delayed until 15 March 1554, as the government tried to implicate Princess Elizabeth in the plot.[2] At trial, Thomas pleaded guilty to high treason.[3] He strongly denied any involvement by Elizabeth[1] and argued that he never intended to hurt the queen,[3] but only wanted to stand "agaynst the comying in of strangers and Spanyerds and to abolyshe theym out of this realme".[2]

For leading an armed rebellion against Queen Mary I at the time of her marriage to King Philip of Spain, Thomas was imprisoned at the Tower of London, found guilty of treason and was beheaded on 11 April 1554[1] at Tower Hill,[3] and was possibly drawn and quartered after beheading.[6] While on the scaffold, Thomas maintained that Princess Elizabeth, the earl of Devon and others were innocent and had no part in his uprising.[3]

As he was attained for high treason, his lands and titles were forfeited to the crown. Queen Mary, in an act of compassion towards Thomas' widow, gave Jane an annuity of 200 marks[2] in June 1554 and, in December 1555, restored a portion of Thomas' lands to the family.[3] Queen Elizabeth I restored the manor of Boxley, Kent to his widow[1] and parliament reversed the attainder by 1570.[2] In 1583, the queen granted to Jane and her heirs the manors of Pole and Criols, Kent and lands in Southfleet, Borden and Denton, Kent, which had formerly been held by Thomas' father, Sir Thomas the Elder[1] (see Research Note on attainder below).

Thomas had been found guilty of treason and attainted by Queen Mary. A result of the attainder was that his title (I believe probably a baronetcy) was declared extinct and all his property, including Allington Castle, escheated to the crown. The property , a very long list of parcels, was inventoried in 1555 and Lady Jane was evicted. By the terms of the attainder, none of TW2's descendants could ever own real property or hold a title. Most of the property was distributed to Mary's supporters right away, although a few minor parcels, such as her dowry, were returned to Lady Jane. (Loades, p. 230, et seq). Queen Elizabeth awarded Allington to Sir John Astley, Master of the Crown Jewels, in 1570, (Simone, p. 242) never to return to Wyatt ownership. Thomas' son George was therefore the last Wyatt to be born at Allington.

The following unsourced children of Thomas and Jane were detached on 23 Nov 2019: Edward, Frances and Jethro.

This profile was re-reviewed/updated to meet current standards and approved for the Project by Traci Thiessen 22 November 2019. 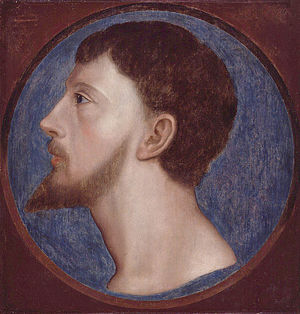 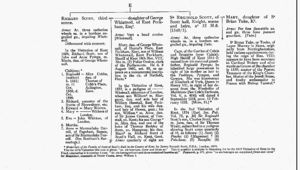 Leave a message for others who see this profile.
There are no comments yet.
Login to post a comment.
Regina Hall
Name: Wyatt

I found this record on FamilySearch, could it be our father and son?

According to the Loades book, TW2 was executed on 11April 1554. According to Simone, p. 174, he was beheaded, drawn and quartered, in that order, not in the Tower of London, but on the nearby Tower Hill. I can confirm this as I went to Tower Hill and photographed a large granite monument naming a list of failed insurgents, including TW2, executed on that spot, as national martyrs.

TW2 had been found guilty of treason and attainted by Queen Mary. A result of the attainder was that his title (I believe probably a baronetcy) was declared extinct and all his property, including Allington Castle, escheated to the crown. The property , a very long list of parcels, was inventoried in 1555 and Lady Jane was evicted. By the terms of the attainder, none of TW2's descendants could ever own real property or hold a title. Most of the property was distributed to Mary's supporters right away, although a few minor parcels, such as her dowry, were returned to Lady Jane. Loades, p230 et seq. Queen Elizabeth awarded Allington to Sir John Astley, Master of the Crown Jewels, in 1570, (Simone, p. 242) never to return to Wyatt ownership. TW2's son George was therefore the last Wyatt to be born at Allington.

TW2 and Lady Jane, according to Loades, had seven children. He cites a 1555 patent roll that lists Jane and five unnamed children alive then. In a pedigree chart following page 227, Loades has Henry and Charles dying in infancy, Arthur, dying without issue, Jane m. Charles Scott, Anne m. Sir Roger Twisden, and Mary, dying without issue. The youngest was George. Loades refers to a "story" told at the time, (p 8 et seq) that George was born during the early days of the rebellion. The rebellion began militarily in January 1554 and ended on 6 Feb when the Earl of Pembroke easily defeated the rebels at the battle of Ludgate (also called Temple Gate) in London. (Simone p. 174)

In this regard, Shulman devotes much documentation to showing that Elizabeth Darrell was the mistress of Sir Thomas the Elder (thus not of TW2).

As is well documented, George worked for years to restore the family name and in 1570, Queen Elizabeth cancelled/reversed the attainder of TW2, in part. As noted above, she then gave Allington to Sir John Astley and most of the real property of TW2 had already been distributed to various others. She knighted George (not known whether a regular knighthood, which is not inheritable, or a knight baronet, which is), and restored Sir George's and his descendant's right to own real property.

I have other info on the Wyatts and am happy to correspond with you further. My aunt joined Magna Carta Dames via Haute Wyatt. However, I see in recent years that Haute's line is now unsettled. Wikitree has conflicting profiles on that issue.

Traci Thiessen
DONE 23 Nov 2019. NOTE re: Elizabeth Darrell below - she was his father Thomas' mistress, not this Thomas. Profiles/connections are currently correct.

If nobody objects, I will do a review and refresh of this 5-star profile for the Magna Carta Project.

Michael Cayley
ODNB says he was of age in 1542 when his father died, pointing to a birth date of in or before 1521". That is likely to be right. I do not believe anyone has an exact birth date and I have no idea where 20 September has come from. I would ignore FindAGrave and Wikipedia. Richardson says about 1522, and that should probably be noted in a research note but I would go with ODNB pending proper research on the profile which needs work to bring it up to current Project standards. His death date - he was executed - was definitely 11 April 1554.
posted Sep 18, 2019 by Michael Cayley

Liz (Noland) Shifflett
Database errors say Russian Wikipedia has different date, 20 September 1521, which it apparently does. But it also apparently (I don't speak Russian) has only FindAGrave as source, which says 1522. (The other link under sources goes to a Russian gambling site). English Wikipedia article says 1522.

update - I edited Darrell-69 to link to the source which names her as daughter of Sir Edward Darrell & mother of Thomas's natural son Francis. I also noted that the entry for Thomas in Douglas Richardson's Royal Ancestry lists only his six sons and four daughters by his wife Jane (or Joan) Haute.

posted Nov 07, 2018 by Liz (Noland) Shifflett
Richard Youatt
What credence is there for the assertion that Thomas Wyatt had a natural son Francis Wyatt, whose son was Elizabeth Darrell? See

http://www.luminarium.org/encyclopedia/wyattyounger.htm. Given the substantive confusion on Wyatt descendents, it seems important to include all of his children.

Thank you for leaving the source citation

Robin Anderson
Since the originating site prohibits republishing its content, I'm removing this article.
posted May 25, 2018 by Robin Anderson