This person was created through the import of Yates and Allied Families.ged on 21 December 2010. The following data was included in the gedcom. You may wish to edit it for readability.

Note: There is a memoir, written by James' daughter Martha Jane, in which she descibes the 80 acre farm that James Yates had near Chapin, Missouri. I have a copy of this memoir, generously given to me by her granddaughter, Marilyn Scott Tank.

Note: James Yates and Cerilda Breedlove met at church and shared the same song book. They later walked home with a group of young folks. "And that was how they met and fell in love" -Aunt Martha Yates Scott.

They were married at the residence of J. W, Breedlove by J. W. Ritchey, an Ordained Preacher of the Gospel at 8:15 AM(not PM) (Wonder what the rush was? Catching a train?)

Note: One of the witnesses for the wedding was Gideon P. Morrison, half brother of Jim Yates.
Note: Cerilda (Breedlove), Myra and Jim Yates

Text: "The father, J. W. Breedlove, of the said Cerilda E. Breedlove, has given his assent to said marriage." 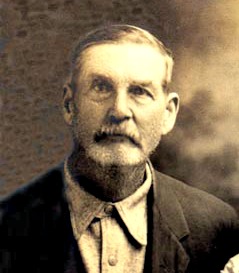 James is 16 degrees from Cecil B. DeMille, 24 degrees from Rosalie Neve and 17 degrees from Henry VIII of England on our single family tree. Login to find your connection.