James and Agnes were apparently the first Yateses to reach Florida Territory. They and the whole family first left the Montgomery-Laurens-Emanuel County area of Georgia for Appling County and later went to Camden County, in the extreme southeast of the state. They "crawled" over into Duval County, Florida, living on Black Creek near Jacksonville, around 1840. They then settled on Shingle Creek, near present-day Disney World in 1853 (Ruth Yates Spence). They are listed in the 1860 Brevard County census. Their graves in the old Yates Cemetery were bulldozed in the 1960s or '70s for an orange grove, but Ruth Yates Spence remembers visiting them with her mother Lenora Lamb Yates and weeding the plots twice a year. The Yates family in Florida says their ancestors came from Georgia and Alabama, the Carolinas and Virginia (in reverse order). James, like his brother Burrell, married a Cherokee. More About JAMES YATES: Comment 1: 1850, Duval County, Fla. (Black Creek) census, p. 111 Comment 2: 1860, Brevard County, Fla. (Shingle Creek) census Fact 1: 1817, Laurens Co., Ga. Fact 2: 1805, Montgomery Co. Tax List Fact 3: 1820, Laurens Co. Census Fact 4: 1830, Appling Co., Ga. as James Yeats, p. 11 Fact 5: 1840, Camden County, Ga. census, p. 8 Occupation: Farmer, rancher Residence: Georgia and Kissimmee area of Florida Notes for AGNES "AGGIE" ROWLAND: According to great-granddaughter Ruth Yates Spence of Shingle Creek, Florida, Aggie Rowland was Cherokee. Her people came with James Yates to Florida, where the last of their children was born, and some of them still live in the Shingle Creek area. More About AGNES "AGGIE" ROWLAND: Ethnicity/Relig.: Cherokee James was born in 1776. James Yates ... [1]

He served in the War of 1812. According to information given by his widow Malinda, James Yates enlisted in Savannah or Charleston Regiment of South Carolina or Georgia Volunteers. Malinda Yates applied for a pension on the 3rd of September, 1889. She said that she married James Yates in Henry Co., Alabama on the 20th of April, 1832 and that James Yates had previously been married to Miss Amy Pridgeon of Glenn Co.,Georgia. The first wife died about four years before James Yates married Malinda. Occupation: Farmer Nancy Patterson's Notes for JAMES ARCHIBALD YATES: Malinda applied for a pension on the 3rd of September, 1889. She gave her wedding date and the fact that he had been married before to Amy Pridgeon of Georgia. Amy had died 4 years before the marriage of Malinda and James. In the pension papers the spelling was Melinda. Melinda also said her husband was 5'10" tall, brown eyes, black hair, dark complexion. According to information provided by Melinda in 1879, James was previously married to an Amy Pridgeon of Glynn County, GA. She died around 1828. 15 June 2000. After reviewing several sources (census, gedcom files, church notes, etc.), I've come to the conclusion that James first came to FL and lived in Jackson County prior to 1832. James is listed on the 1830 Jackson Census under the name James Yets. Their first child, Gadi, was born in Jackson County November 30, 1833. Second son, Levi was also born in Jackson about 1836. Third child, Jordan was born in Jackson around 1838. Amey, James Archibald, and Elizabeth could have been born in Jackson as well. The rest of the children were probably born in Holmes or Washington Counties. They were in Holmes County for the 1850 census and in Washington County for the 1860 census. According to census records, there was another James in Holmes County around 1830 but I think this could have been another James Yates who may have been from AL or James A. could have been counted by both census takers. August 2000: On 2 June 1861, James A. Yeats, Gadi Yeats, and Levi Yeats served as a juror for a coroner inquest for the body of George Taylor. James was paid for 25 miles travel, Gadi for 29 miles, and Levi for 30 miles. Levi endorsed his, signing his name Levi Yeats. Mary Hardy(descendant of Mary Yates) She had access to a family bible of Sarilda Yates Brock. The bible did not name James A. Yates parents but did stated that he was part Cherokee. It also said he was from Chatham County, North Carolina. A township was given but it was not legible but looked like either Riley or Rawls. It also gave a story the James got into a dispute over some water rights and bit the nose of of a man and had to leave home. The story stated that he left home on foot for Georgia with a red bandanna full of his clothes and a little money. I guess Glynn County, Georgia is where he ended up since he married Amy Pridgeon there. He moved on to Jackson County, Florida and ended up in Washington County where he ran a mill. Also James receieved a pension for duty in the war of 1812 where he had severed under Capt. William Cones. The Yates family also ran a Mill. At this time I am not sure whether it was James himself with help from his sons or whether it was owned by one of his sons. The road on which the mill sat is named Yates Mill road. (Washington co., Fla.) Census: 1860, Washington County, FL Jury Duty: 02 Jun 1861, Coroner's inquest for George Taylor Military service: 1812, Rec. pension for duty served(#wo-44942)

James Archibald Yates was born circa 1796 and died on 5 Apr 1874. He was buried in Washington, Florida, United States of America. [2] 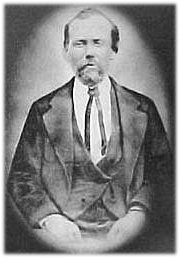 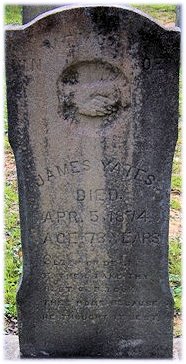