No mention of a son William Yates in John Yate's will 1777.

Please see the Find-a-Grave link shown on this profile, BEFORE any attempt to merge with another WikiTree profle: John Yates-942. They may be entirely different persons. 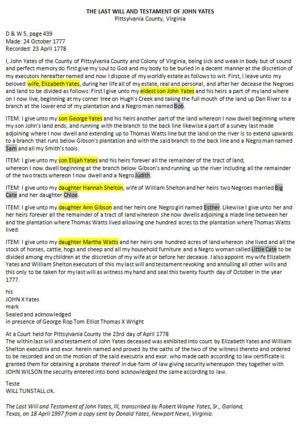 Becky Simmons
Yates-4885 and Yates-3207 appear to represent the same person because: Yates-4885 and Yates-3207 appear the same bc of name, birth and death dates and locations, same wife, child(ren)... the location difference could be easily seen where some public family tree sites have different allotments for location names based on the year where others do not. If these two are deemed separate then I believe it isnworth discussing to see if a profile needs to be deleted for having exact, but thusly erroneous information.
posted May 04, 2021 by Becky Simmons
edited May 04, 2021 by Becky Simmons
John Yates
• Yes, the same will is shown for both Yates-3207 (this page) and Yates-942. Yet the linked children are different. Please do not merge yet.

• Is there any reason is to believe that the father of those mentioned in the will was also the father of the three brothers who went from Caswell NC to settle in Robertson Tn (William, Thomas, and James.) Let's not assume without any reason. (The FindaGrave post, btw, is rather garbled.)

• The John Yates of the will shown here, "John of Dan River," is commonly believed to be the father of Stephen Yates, 1846- or 1856-1836, known proprietor of the famous Yates Tavern, pictured on the FindaGrave page. Yet there is no mention of Stephen in the will either. The tavern, believed built around 1750, might have been transferred to Stephen before John's will was written, but why no mention of Stephen at all? A family conflict, we might imagine? Utter speculation. Has anyone checked to see whether any piece of land described fits the location of Yates Tavern exactly?

• We might clear much of this up with Y-DNA tests of direct-line descendants. Several from Stephen Yates, of Yates Tavern, have tested. A paternal-line descendant from Thomas Yates, one of the Robertson Tn Yates brothers, has agreed to test. For the men listed in the will, PATERNAL-LINE DESCENDANTS of JOHN YATES (married Jemima Roper?), GEORGE YATES (m. Frances Lewis?), and ELIJAH YATES (m. Mary Hogg?) NEED TO TEST! PLEASE, HELP RECRUIT SUCH MEN.

• My bet: there are two or three John Yateses in discussion here. Disagree? Please help to prove me wrong.

Debra (Downs) Allison
Reading the bio on your Find A Grave, this IS Yates-942. Children match perfectly.

John made a will in Pittsylvania Co., VA and named his wife Elizabeth Yates, and children: John Yates, George Yates, Elijah Yates, Hannah Shelton: wife of William Shelton, Ann Gibson and Martha Watts. He signed his will on 24th of Oct., 1777. This John is my 5th great-grandfather.

Elizabeth's will is in the name of Yeates. She names children: John Yeates, George Yeates, Elijah Yeates, Hannah Shelton: wife William Shelton, Ann Gibson: wife of Richard Gibson, and Martha Watts. She signed her will on the 3rd of Sept., 1793 in Pittsylvania Co., VA. This Elizabeth is my 5th great-grandmother. Thank you, Tina Hall