[9] 3/10/2012; from Jim Yates; Dad had not lost complete sight but vision was greatly diminished in his right eye and although right handed he adopted shooting left handed. This was due to his suffering the smallpox....same epidemic early 1900's that killed Gpa Jim and Dad's sister.

[10] From: Jim Yates Sent: Saturday, July 05, 2008 To: Ron Great! Came thru fine. Is this a military info registration or what? I do remember my Dad saying that for years he celebrated his birthday on Jan 9th, the date on this form...then he got copy of his Birth cert from English, IN and it showed him born on Jan 8th...he said he had been celebrating it a day late most if not all his life! He also said the birth cert didn't give his name, only that a boy was born to his parents on Jan 8th, 1888. (just one more little story you needed to hear from me)!

[11] Never had a phone as long as I was still home....finally Fred thought they needed a phone and proposed a $5 a month to help them with getting and keeping one...we cooperated...don't remember how..but also maintained the 5 a month to help them with living expenses...they only had Soc Sec and barely made it...we helped with a car once I know...

[12] Adding to this...when someone needed to call us/them....Barbara's (Fred's Barb) folks (Walter and Imogene George) lived next door west and would bring messages to us...or let us use the phone..plus there was an outside phone downtown we went to sometimes....and I remember your Mom being the telephone "operator" in Chrisman...when I found out it was her I called her once and attempted to tell her how the phone worked! It's really funny now of course... those days there was a maze of "operators" all over the nation and making a call to calif for example...was a big deal! The operators had quite a job "putting you through"....quite the thing to think back on! jim

[13] 4/27/2009 Ron: Too bad this license has not been taken better care of, however, it's pretty clear that Dad and Jesse's marriage date is May 23rd, 1910. It was at the residence of W. H. Scott, probably the minister and the two witnesses were (Looks like) Julia Scott and (not sure of first name) but (something) M. Scott..might be Don..not sure. I distinctly remember Dad (many times) saying he came to Edgar Co., Chrisman, in 1910....so they came as fairly newlyweds! I'm supposing all the kids were born in Edgar County. jim

[14] I've thought of a couple of others that had to do with Dad's strength and prowess. I should tell them to you as well...since I might be your last source for this type of things.

[15] I remember Dad telling us about the "old ladies"....smoking their pipes...putting their glasses up on top their heads and forgetting they were up there, looking all over for them! They were tough survivors for sure. Did I tell you about Dad telling about his Grandma (don't know which one) trying to give him a little dog?

She was trying to get Dad to accept this little dog that was lying there in her house in front of them. She began telling him how smart the dog was...it was summertime, the front door was open. She commanded the dog to go outdoors...he just looked at her...she commanded him again--he began to get up slowly--she gave him another command and he started toward the door, then veered off and headed for a little day bed in the room whereupon she said "go out the door or under the bed"!

[16] Here again, this was such a great story Dad told me when I was a boy that I had no inkling of ever wanting to know which "uncles" he was referring to, so never asked.

The story goes that once Dad was in the company of two of his uncles. still a very young man but definitely coming "into his own". In joshing around the uncles produced a length of rope and told him they were going to "tie him up". This is a short story and didn't have a lot of embellishment to it-but--in a short while, Dad had the rope around both of them and they could go no further!

Don't get the idea Dad was a bragger; anything but, you had to be "good" to get a story out of him, not at all like me!

[17] This one is about him as a young man when he attended a social event at a country church. A lot of that happened in those days, events, pie suppers, cake walks, ect, at the country churches which served as social gatherings too.

I think the event was a pie supper where the ladies would bake pies and they all gathered to see who would buy their pie, then it was the privilege of the fellow who bought the pie to get to eat it with the lady.

It seems Dad had outbid another guy and angered him. So as he was leaving out the front door there were several standing outside and as Dad was clearing the door he saw one of the men point above his head with a look of terror so Dad quickly put his hand up over his head just in time to deflect a lantern the angered man was coming down on his head with. The lantern separated from it's bail (handle) and the guy was left there standing with only the bail in his hand--but not for long; seems Pop worked him over pretty well.

Is Harry your relative? Please don't go away!

ask our community of genealogists a question.
Sponsored Search by Ancestry.com
DNA Connections
It may be possible to confirm family relationships with Harry by comparing test results with other carriers of his Y-chromosome or his mother's mitochondrial DNA. Y-chromosome DNA test-takers in his direct paternal line on WikiTree: It is likely that these autosomal DNA test-takers will share some percentage of DNA with Harry: 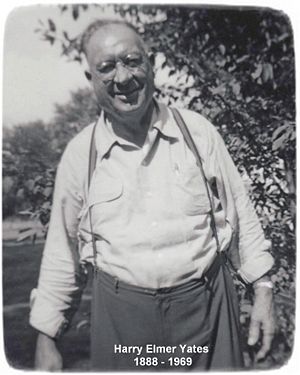