[2] A Crawford County relative speculates that it was his job on the railroad where he contracted the dreaded disease of smallpox. Of course when he became sick he naturally went home. Then the whole family was exposed to the disease. My father had scars from the disease and so did Aunt Ruby, Betty's mom. Some of the others got it also. Then on September 16th of 1903 he died from the disease. A daughter Nellie also died from the disease.

[3] Uncle Arthur, Wilbur and Imogene's dad, was the oldest of the family and so became sort of the head of the household after Grandpa died. He was about 22 yrs old by then and my dad, Harry, was about 15. Now another example of bravery of a different type; since the smallpox epidemic was so rampant and so many had died no one would come near the family, which included the undertaker. Uncle Arthur and Dad had to bury their own father. Dad said they loaded him into the back of the wagon, took him over to the cemetery west of Grantsburg, and buried him. I never knew if someone else dug the grave for them. I have tried to place myself in their position at that time.

No more info is currently available for James Yates. Can you add to his biography?

ask our community of genealogists a question.
Sponsored Search by Ancestry.com
DNA Connections
It may be possible to confirm family relationships with James by comparing test results with other carriers of his Y-chromosome or his mother's mitochondrial DNA. Y-chromosome DNA test-takers in his direct paternal line on WikiTree: It is likely that these autosomal DNA test-takers will share some percentage of DNA with James: 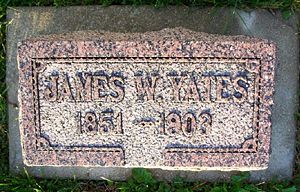