No more info is currently available for John Yates. Can you add to his biography?

Elizabeth Roberson Yates' apprehension about the War and her husband would be drawn out but not typical. Her husband John Yates enlisted at Alton, Crawford County, Indiana on November 20, 1861 for a period of time extending for, "During the War" and reported for duty seven days later on November 27, 1861 at Camp Nevin, located 76 miles from home in Munfordville, Kentucky.

John Yates' Company First Sergeant was his cousin William G. Roberson. Upon Company K formation, James G. Land enlisted with the rank of corporal, subsequently promoted to 2nd Lieutenant and thereafter was appointed Captain and the Company Commander. Tolbert McCraney married Samantha (Matt) Yates on May 4, 1865 just after the close of action which makes him John Yates's son-in-law after John dies. John Yates is the 2nd great-grandfather of Ronald E. Yates, author of this information.

John Yates's experience as a soldier in the broad view brings to mind an old quote: "If it wasn't for all the bad luck, I wouldn't have any luck at all". Three months after joining his company John Yates was hospitalized and given thirty days medical leave at home for some unknown but repugnant infectious ailment. He reported back to duty in March 1862 and participated with the company during the summer months. It would appear that during this service he was injured in action or by accident such that he could not ambulate well. When his regiment was to march to Nashville in October 1862 he could not complete the march and was subsequently hospitalized in Louisville. His condition worsened to the extent that physicians initiated a medical discharge from the Army and he departed with orders for Grantsburg, Indiana January 7, 1863 with proper documentation. He understood he was no longer in the military, properly filed his paperwork, was in communication with members if his Company and was pondering other ways to serve other than as a "footman". John's problems were just beginning but he didn't know it yet because Army Medical Staff failed to follow through and report John's medical discharge with his Company K, 38th Indiana Commanders. So, you can imagine his surprise when on August 29, 1863 the Provost Marshals arrested him for desertion and transported him immediately to Chattanooga.

The John Yates Court Martial (AA 623) was conducted in Chattanooga, TN on October 22, 1863. The full transcript of the proceedings were discovered in 2008 and confirmed previous deductions based on logic as to how things took place. lst Lieutenant James G. Land, 2nd Lieutenant George S. Newman, Captain George W. Windell, Surgeon John Curry, and Private George W. Roberson testified at his Court Martial. The facts were reviewed including a copy of his medical release from the Army endorsed by the 2nd District Provost Marshall. John Yates was found not guilty of all charges and specification and his reward for all of this was he was now reinstated in the Army and was welcomed back to his old Company K Company with his neighbors and friends.

At this point his Company was involved in the siege of Chattanooga, TN, September 24-November 23, 1863; Chattanooga-Ringgold Campaign November 23-27; Lookout Mountain November 23-24, 1863; Mission Ridge November 25, 1863; Pea Vine Creek and Graysville November 26, 1863 then Ringgold Gap, Taylor's Ridge, November 27, 1863. The Company then started their duty at Rossville, GA., and Chattanooga, TN, until February, 1864, and at Tyner's Station and Graysville, GA until May 1864. The winter of 1863-64 was passed at Rossville, GA and Chattanooga. While at Rossville, GA the regiment re-enlisted on the 28th of December, 1863, and, on the 3rd of January, 1864, the entire regiment started home on a Veteran furlough reaching Indianapolis on the January 9th with 360 men and officers.

It would seem logical that John would be excited to see his family he likely had not seen since he was taken away under arrest earlier in September 1863. Waiting for him at home on January 10th or 11th after traveling from Indianapolis was Samantha 16, James Wilson 13, Thomas Jefferson 11, Evaline 8 and twins Emmie and John R. age 6, waiting to see and touch their father again. The celebration of the homecoming was shattered when little Evaline age 8 died for some unknown reason about 10 days later. You can imagine the grief felt by all as they buried their young child near their home at Lankford School Cemetery. The last time they will see their father will be on the 26th of February, 1864 when the regiment returned to Chattanooga and moved to Tyner's Station in March and then Graysville, GA in April 1864 in preparation for the push to Atlanta.

April, May, June and July 1864 constitutes the Federal advance towards Atlanta and the Confederate forces resisted each and every bloody mile of ground. We have found many letters written by John during this period and their contents have been summarized along with the original letter. If you place what John is writing in context they are chilling in simplicity of the mission to stay on the move at all costs towards the objective. He and his comrades "See the Elephant" which is how that generation of fighter describes the 1,000 yard stare of a grizzled veteran in combat operations. In 2010 two of his descendants retraced his pathway described in the letters bringing a whole new perspective to the story. This was a war up close and personal where progress could be measured in taking a certain field, high ground or maintaining a strategic location. This was a successful strategy used until the Armies met at Kennesaw Mountain just north of Atlanta and Sherman tried a frontal attack.

Much has been written about this battle as it was a painful encounter. General Joseph E. Johnston, fearing envelopment, moved his army to astride Kennesaw Mountain. This entrenched arc-shaped line, to the north and west of Marietta, GA protected the Western & Atlantic Railroad, the supply link to Atlanta. Having defeated General John B. Hood troops at Kolb’s Farm on the 22nd, Sherman was sure that Johnston had stretched his line too thin and, therefore, decided on a frontal attack with some diversions on the flanks. On the morning of June 27, 1864 Sherman sent his troops forward after an artillery bombardment. At first, they made some headway overrunning Confederate pickets south of the Burnt Hickory Road, but attacking an enemy that was dug in was futile. The fighting ended by noon, and Sherman suffered high casualties. Johnston withdraws his forces on the evening of July 2, 1864 to a better position for defense of Atlanta.

With Johnston's relocation to defend Atlanta, Sherman is now able to embark on a strategic campaign again. The best way to visualize this in summary is to think about one Federal Army poised north of Atlanta. From Sherman's perspective as the attacker he views his resources as either the Left side or Flank of his forces, the Center of his forces or the Right side or Flank. By designing a plan of coordinating moves Sherman will have his Right Flank hold their ground and not let anyone move through them; consider this as the hinge of a swinging door. While the Right Flank holds he will have the Left Flank and the Center forces sweep forward in an arc moving southward towards Atlanta. By July 8, 1864 the Federal Left Flank and Center forces infantry was across the Chattahoochee River to the south side paused while both sides continued to engage and posture with one another. John Yates and his fellow comrades of Company K, 38th Indiana Volunteers were operating as part of the Right Flank and were charged with holding their ground while the Left and Center were moving.

Company K, 38th Indiana was encamped about 2 miles north of the Chattahoochee River when John Yates' luck finally expired along with him on July 14, 1864. We knew that John died accidentally on this date but his death location and the circumstances remained mysterious for 146 years until it was pieced together in October 2010. Only now have determined researchers compiled the results of what is best described as a "Cluster Analysis" of seemingly unrelated events. The seemingly unrelated event question is on a day that was relative quite without recorded war casualties in the theatre of battle, why did approximately 25 Federal Soldiers die about the same time? The conclusion based on several pieces of documentation and outcomes is that about 4:30 PM July 14, 1864 a Rouge "Killer Storm" swept through the North Atlanta area causing widespread chaos with guns and artillery discharging, ammunition is exploding, several men directly hit with lighting and many trees to be taken to the ground. From anecdotal information we know that John has gone to his tent for a rest and had the unfortunate occasion to be next to one of these falling trees which kills him.

From John's friend and brother-in-law George W. Riggle we are told John was inside his tent and a tree fell and crushed him dead. The second mystery was the location of John's first grave before the Marietta National Cemetery was created and he was moved to his final grave. This last mystery was resolved when researchers discovered invoices paid to post-war vendors who raised cash by recovering Federal Soldiers to be re-interred in the National Cemetery. As a result, we can fix pretty closely the location of Company K, 38th Indiana on July 14, 1864 and John's initial burial location by making a study of the invoice statement which provides the location. This location is "1 1/2 miles southwest from Vinings Station and 3/4 miles west of W & R Railroad buried under a French tree in an old field by a tree." (33.853342, -84.489028)

posted 2 May 2012 by Ronald Yates   [thank Ronald]
Login to add a memory.
Is John your ancestor? Please don't go away! 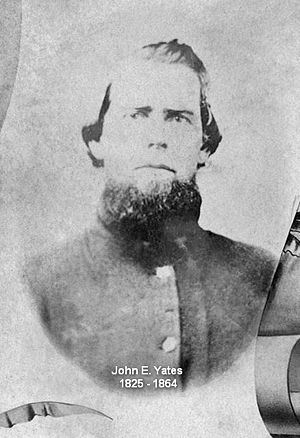