William was born in 1844 at 5 Gower Street, London, England. He was the son of John Yates and Sarah Mousley. He, and his parents and siblings, and his aunt, were living in London in 1851.[1] By 1861, after his parents' death, they had returned to Burton-on-Trent.[2]

According to a family history written by Juanita Gayer, "He [William Henry] apparently was a rather adventuresome individual. I understood he first went to Australia, but did not like it, and wound up in New Orleans, which apparently he fell in love with. At any rate he wrote glowing letters back to his family, urging his brothers and two sisters to join him."[3]

We know that William Henry homesteaded some land near Folsom, because in his diary, John Mousley writes of his journey to his brother's land. Also we have a homesteading certificate of William Henry's for some land. (TODO- Scan and upload.) So it is likely that at least some of the time in the very early years of his stay in America were spent on the land. Certainly the New Orleans newspapers do not have any mention of him prior to 1872 that I can find. However his Obituary (see below) seems to contradict that theory.

He started to dip his toe into politics in 1872, with a run for State Representative for the Third Ward of New Orleans, on the Independent Republican Ticket.[4] That year was a turbulent one in Louisiana politics, as three factions struggled for control of the Republican party. In early 1872, one faction of the party forcibly took over the Mechanic's Union, then serving as the State Capitol, and there was rioting in the streets, in which one man was killed and the U.S. Army was called in to keep the peace. I have not yet found any traces of WH Yates' role in the party politics at the time, but based on the other names on the ticket, the Independent Republicans were the citizens party as they supported E.A. Burke for administrator of improvements. [5] Ultimately, though, W.H. Yates did not win the race. [6][7]

In 1873 he was married to Mary Elizabeth Gothard, in England, at St. Modwen's in Burton-on-Trent in England. [8] So he made at least three trips - the first, before John Mousley, then a trip home to get married, and then a trip back with his wife Mary Elizabeth. There is an arrival in 1874 of WH Yates and wife on the Cordova, along with his two sisters (listed under the name Mousley), and Aunt Catherine Mousley. [9] The timeline is right after his marriage. On that trip, his occupation is listed as "Broker."

In 1876 he received some kind of appointment as a clerk. [10] Could it have been a postal appointment? (This is foreshadowing). In 1878 we find he is now the Chairman of the Mechanics and Laborer's Union, as well as the secretary of the convention. [11]. This union was quite active in the 1878 election, sponsoring "The Workingman's Ticket" [12] and forming a coalition with the Republican Party.[13]. There was some controversy among the MLU union in 1879, having to do with W.C. Kinsella. [14][15]. In 1880, W.H. is now associated with the Union Laboring Men's Assocation. Not sure if this is a different union or the MLU renamed, maybe investigate that. The ULMA conducted a strike on the levee in Feb. 1880 and a rally in April 1880. [16][17]. 1880 also finds him the President of the Street Railroad Men's association, and attending midnight meetings and leading strikes. "They are opposed to all boarding houses run by the railroad companies." [18] In one of the articles he is representing himself as having once driven a street car. [19] (Note: We are now up to three union memberships).

Mary Elizabeth had returned to England by 1881 (per the census) although it could have been earlier. Why did she return? It would be interesting to know....! TODO - Check immigration records for return to England

1881 and 1882 find no mention of him in the New Orleans papers. Was he living elsewhere, or preoccupied with domestic matters? Certainly attending midnight meetings of the union would not contribute to domestic harmony.

His career takes another turn around 1882. William Henry was practicing as a doctor, as shown by his certificate issued by the Board of Health, which is dated October 12, 1882, saying that "he has been registered as a practitioner of Medicine in the State of Louisiana for more than five years, without a medical degree." [20] The medical certificate was sent to Thibodeaux which shows might have been residing there.

W.H. Yates, formerly employed in the distributing department of the Postoffice, and who was arrested on the charge of having opened letters addressed to his wife, from whom he is separated, was examined yesterday before Judge Quintero, and sent before the Circuit Court under a bond of $500. [24]

I had several email exchanges with the National Archive in Fort Worth and they were unable to find any court cases connected with the newspaper item. The archivist pointed out that if the case was dismissed, there would likely be no record of it in the court records. Since we do not have a docket number there is probably no way to pursue this further at this point. Considering that there is no further mention of the item in the paper (and there were four articles about the arrest) it seems likely that there was not a big public trial. Also the following year he was appointed to be the Secretary of the Ways and Means committee, so (if this was in fact him) it seems unlikely that there was a big public scandal.

In 1884 we are back to politics with a carpenter's strike in April; apparently he is still secretary of the MLU. [25]. Also during this year he served as Secretary of the Ways and Means committee to the legislature [26] He visited St. Tammany in July. [26] (Note; there is a later disclaimer in the St. Tammany Farmer that mentions that he did not actually author that report they mention but just served as the secretary) [27]. He registered as a physician again this year. [28]

Also in May 1884 he graduated from Straight University with his Bachelor at Law[29]. Straight University was a historically black college that operated between 1868 and 1934 in New Orleans, Louisiana. It was founded by the American Missionary Association. The law department was notable because blacks and whites trained side by side. [30]. In Jan. 1885 he was admitted to the bar. [31]

In May 1888 he was also returned as the secretary of the Ways and Means committee[36] and September also finds him a member of the Magnolia Social Coterie [37] and the Poydras Market club. [38]. His sudden death was mentioned in the Times Picayune. [39]

The below obituary has been passed around in the family; the original has not yet been located.

Dr. Yates was a native of England, well born and finely educated. He came to this state twenty years ago, and in a short time became prominent in political circles. At this period of her history, Louisiana was struggling through the reconstruction era, and the fine talents of Dr. Yates as a brilliant writer and eloquent debater became known to the illiterate men who were endeavoring to steer the vessel of state. In consequence, his services were eagerly sought, and many of the best things said and done were the emanations of his pen. Later on, he became secretary of one of the labor parties of the city, and had considerable political influence. In the session of 1884, 1886 and 1888, he was the clerk of the most important committee of the legislature, the ways and means, and did efficient service. Dr. Yates was a Mason, and his remains were conveyed to their last resting place in the Union Lodge vault, by the fraternity. He was a companionable, bright, pleasant and agreeable gentleman, and leaves many friends, who lament his sudden demise.

Deceased was a brother of Mrs. Chas. D. Murray, of West Lake Charles. [40]

N.B. It seems rather odd that the obituary leaves out his brother John Mousley, doesn't it?

IMMIGRATION AND SHIP RECORDS I HAVE SEARCHED:

are there English records of who LEFT the country?

ask our community of genealogists a question.
Sponsored Search by Ancestry.com
DNA Connections
It may be possible to confirm family relationships with William by comparing test results with other carriers of his ancestors' Y-chromosome or mitochondrial DNA. However, there are no known yDNA or mtDNA test-takers in his direct paternal or maternal line. It is likely that these autosomal DNA test-takers will share DNA with William: 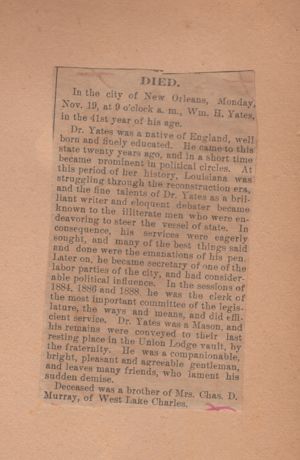 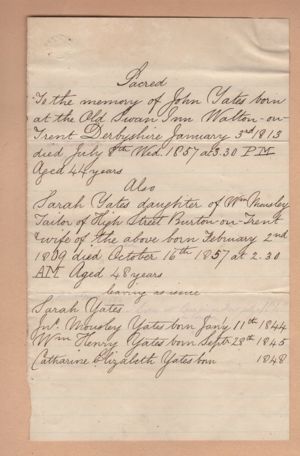 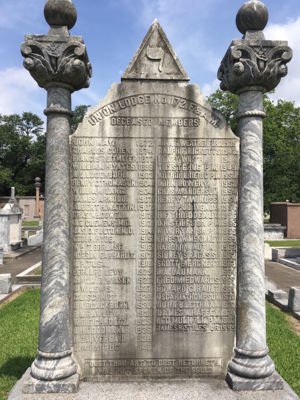 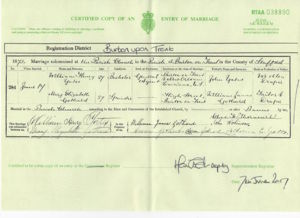 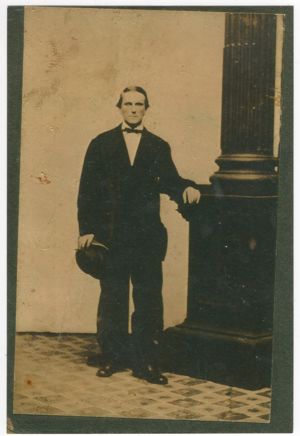 David Gothard
Yates-4074 and Yates-849 do not represent the same person because: They do not match
posted Jun 13, 2017 by David Gothard

William is 21 degrees from Mary McCauley, 25 degrees from B. W. J. Molier and 18 degrees from Henry VIII of England on our single family tree. Login to find your connection.