Charles "Chuck" Yeager was born on February 13, 1923, to farming parents Susie Mae and Albert Hal Yeager in Myra, West Virginia. He appeared on the census of 4 April 1930 in the home of his parents at Hamlin, Lincoln County, West Virginia.[1] The family was living in 1940 in Hamlin as well.[2] He graduated from high school in Hamlin, West Virginia, in June 1941. Yeager enlisted as a private in the U.S. Army Air Forces (USAAF) on September 12, 1941, and became an aircraft mechanic at George Air Force Base, Victorville, California.[3]

On February 26, 1945, Yeager married Glennis Dickhouse, and the couple had four children. Glennis Yeager died in 1990.[3]

Yeager remained in the Air Force after the war, becoming a test pilot at Muroc Army Air Field (now Edwards Air Force Base, California). The USAAF selected Yeager to fly the rocket-powered Bell XS-1 in a NACA program to research high-speed flight. He called the X-1 Glamorous Glennis in honor of his wife.[3]

Yearger's biography including his military service, from 1941 to 1975, and his work as a test pilot is described in detail on Wikipedia.[3]

Chuck Yeager is not related to Jeana Yeager, one of the two pilots of the Rutan Voyager aircraft, which circled the world without landing or refueling. Steven Wayne Yeager, a professional baseball player, is a nephew.[3]

ask our community of genealogists a question.
Sponsored Search by Ancestry.com
DNA Connections
It may be possible to confirm family relationships with Charles by comparing test results with other carriers of his ancestors' Y-chromosome or mitochondrial DNA. However, there are no known yDNA or mtDNA test-takers in his direct paternal or maternal line. It is likely that these autosomal DNA test-takers will share some percentage (beta) of DNA with Charles: 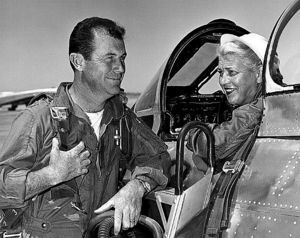 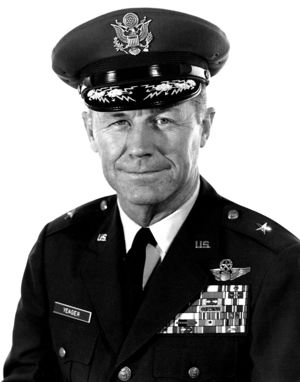 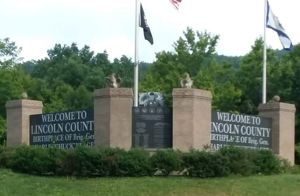 Chuck Yeager and Bell X-1 named for his wife 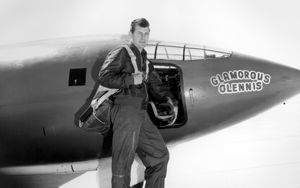 Cathi (Clore) Frost
Several people have asked me if Chuck Yeager was a descendant of 1717 Germanna Colonist Nicholas Yager. Elizabeth Yates "Betty" Johnson has done much work sorting out many Yagers and reports that he is not.
posted Dec 09, 2020 by Cathi (Clore) Frost

Lillian Porter
Chuck Yeager was born and raised around fifteen miles from where I live, Thanks for adding me, It is an Honor to help on his Profile
posted Mar 21, 2019 by Lillian Porter

Bob Fields
Could you please make the biography and family tree public, since this is a famous (Notable) person we would like to connect to the rest of WikiTree. People always like to see who they are related to. Also add a picture (from http://en.wikipedia.org/wiki/Chuck_Yeager) and some very brief genealogy-related facts. And add the appropriate Categories for his achievements, and the template. Thanks so much.
posted Sep 01, 2014 by Bob Fields