William Yeats was born in Ireland.

William Butler Yeats was born at Sandymount in County Dublin, Ireland. His father, John Butler Yeats (1839–1922), was a descendant of Jervis Yeats, a Williamite soldier, linen merchant, and well-known painter who died in 1712. Benjamin Yeats, Jervis's grandson and William's great-great-grandfather, had in 1773 married Mary Butler of a landed family in County Kildare. Following their marriage, they kept the name Butler. Mary was of the Butler of Neigham (pronounced Nyam) Gowran family, descended from an illegitimate brother of the 8th Earl of Ormond.

William’s mother, Susan Mary Pollexfen, came from a wealthy merchant family in Sligo, who owned a milling and shipping business. Soon after William's birth, the family relocated to the Pollexfen home at Merville, Sligo, to stay with her extended family, and the young poet came to think of the area as his childhood and spiritual home. Its landscape became, over time, both literally and symbolically, his "country of the heart." So also did its location on the sea; John Yeats stated that "by marriage with a Pollexfen, we have given a tongue to the sea cliffs." The Butler Yeats family were highly artistic; his brother Jack became an esteemed painter, while his sisters Elizabeth and Susan Mary—known to family and friends as Lollie and Lily—became involved in the Arts and Crafts movement.

Yeats was raised a member of the Protestant Ascendancy, which was at the time undergoing a crisis of identity. While his family was supportive of the changes Ireland was experiencing, the nationalist revival of the late 19th century directly disadvantaged his heritage and informed his outlook for the remainder of his life. In the earlier part of his life, Yeats was a member of the Irish Republican Brotherhood. Due to the escalating tension of the political scene, Yeats distanced himself from the core political activism in the midst of the Easter Rising, even holding back his poetry inspired by the events until 1920.

In 1867, the family moved to England to aid their father, John, to further his career as an artist. At first, the Yeats children were educated at home. Their mother entertained them with stories and Irish folktales. John provided an erratic education in geography and chemistry and took William on natural history explorations of the nearby Slough countryside. On 26 January 1877, the young poet entered the Godolphin school, which he attended for four years.

He began writing his first works when he was seventeen; these included a poem that describes a magician who set up a throne in central Asia. Other pieces from this period include a draft of a play about a bishop, a monk, a woman accused of paganism by local shepherds, as well as love-poems and narrative lyrics on German knights. His early poems, which are meditations on the themes of love or mystical and esoteric subjects, include Poems (1895), The Secret Rose (1897) and The Wind Among the Reeds (1899). The early works were both conventional and, according to the critic Charles Johnston, "utterly unIrish," seeming to come out of a "vast murmurous gloom of dreams."

In September of 1917, Yeats proposed to 25-year-old Georgie Hyde-Lees (1892–1968), known as George. She accepted, and the two were married on 20 October 2017. The couple went on to have two children, Anne and Michael. Although in later years he had romantic relationships with other women, Georgie herself wrote to her husband "When you are dead, people will talk about your love affairs, but I shall say nothing, for I will remember how proud you were."

In December 1923, Yeats was awarded the Nobel Prize in Literature, "for his always inspired poetry, which in a highly artistic form gives expression to the spirit of a whole nation." The prize led to a significant increase in the sales of his books. For the first time he had money, and he was able to repay not only his own debts but those of his father.

William had been appointed to the first Irish Senate in 1922 and was reappointed for a second term in 1925. During his time in the Senate, Yeats warned his colleagues: "If you show that this country, southern Ireland, is going to be governed by Roman Catholic ideas and by Catholic ideas alone, you will never get the North ... You will put a wedge in the midst of this nation." He memorably said of his fellow Irish Protestants, "we are no petty people." He retired from the Senate in 1928 because of ill health.

William died at the Hôtel Idéal Séjour in Menton, France, on 28 January 1939 at age 73. He was buried after a discreet and private funeral at Roquebrune-Cap-Martin,[1] but was re-interred with a state funeral in 1948 in Drumcliff Churchyard, County Sligo, Ireland. The outbreak of World War II, dying in France, and a frozen-hard January ground altered his original burial plans to be buried “under bare Ben Bulben’s head” in Drumcliff Churchyard. Over the years, there have been published stories questioning which remains were actually transferred from the French cemetery and put to rest in Yeats’ Irish grave. A detailed investigation followed, but in 1988, his children replied in a published statement that they were satisfied, it was a family matter and did not want pursue the matter further.[2]

Yeats and George had often discussed his death, and his express wish was that he be buried quickly in France with a minimum of fuss. According to George, "His actual words were 'If I die, bury me up there [at Roquebrune] and then in a year's time when the newspapers have forgotten me, dig me up and plant me in Sligo’.” His epitaph is taken from the last lines of one of his final poems, "Under Ben Bulben":

Cast a cold Eye
On Life, on Death.
Horseman, pass by! 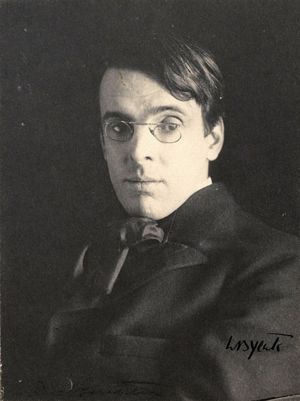 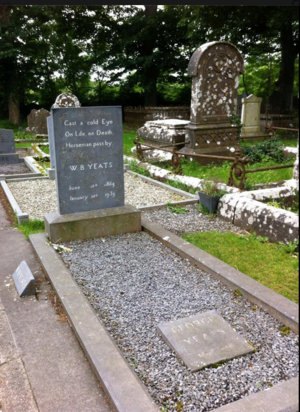 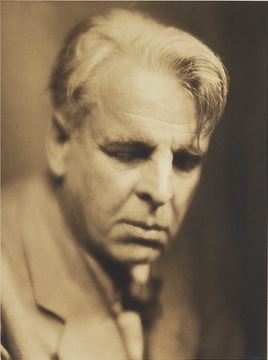 Leave a message for others who see this profile.
There are no comments yet.
Login to post a comment.
Joyce Raftery
Butler is a given name in each generation and NOT part of the last name. It is not hyphenated as Butler-Yeats or ever written as Butler Yeats. He should be ciited as: