“Albert Thunder, a nephew of old War Club, had been brought up in a white family and attended the government Indian school in Kansas. He has studied several terms at Lawrence University." He was also a skilled musician, having been a member of the Bussyville Band. (Wisc. St. Journ.) He was also "a principal figure in the Dells Standing Rock Indian ceremonials each summer." (Obit)

Capt. Saunders quotes him as saying, "Today many of my people are Christians, or Peyote, but I am happy to say that it is still the custom of our tribal narrators to go from lodge to lodge, perpetuating the Winnebago culture with their marvelous tales of long ago and with no other reward than the obligation placed upon their host to prepare and serve the traditional story-teller's supper." (Moon, p. 42)

"He ... is an expert trapper and rifle shot. His companion was a cousin named Long Marsh. … During the winter and early spring they were successful in trapping and hunting and kept the camp supplied after Old War Club’s illness became severe.” (Wisc. St. Journ.)

"Winnebago Chief Dies At The Dells

Wisconsin Dells, Wis. — (AP) — Albert Yellow Thunder revered chief of the Winnebago Indian tribe and a Spanish American war veteran died Thursday following a heart attack. The 73 year old tribe leader was well known throughout the middle west as a principal figure in the Dells Standing Rock Indian ceremonials each summer. He and Mrs. Yellow Thunder had been married 51 years. Other survivors are 10 children and three grandchildren.” (Sheboygan Press)

Thank you Richard Dieterle for the research into and creation of this profile.

ask our community of genealogists a question.
Sponsored Search by Ancestry.com
DNA
No known carriers of Albert's DNA have taken a DNA test.

Images: 2
Right to Left: Smoky Smoke, a Menominee; Yellow Thunder, son of the old chief; Bill Decorah (with club), and his wife and child at a camp near Linen Mill, close to the south bank of the river Baraboo (1905), by Harry Elsworth Cole. 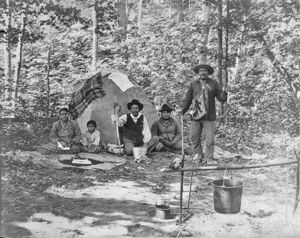 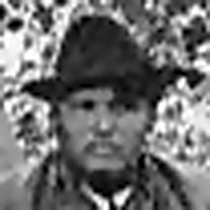