Elizabeth (York) Tudor is a member of the House of Tudor.

Elizabeth (York) Tudor is a member of the House of York.

As the daughter of Edward IV and Elizabeth Woodvylle, as well as the consort of Henry VII, Elizabeth was born a York princess and a died a Tudor queen.

She is not "Elizabeth Plantagenet." The latter is her half-sister through Edward's mistress, Elizabeth Lucy.

Death and burial of Elizabeth of York

(Royal Tombs of Medieval England) Elizabeth of York died at the Tower on 11 February 1503 and was buried at Westminster ten days later. A contemporary drawing made of her funeral procession shows the queen's coffin with effigy depicting flowing hair bearing a crown and scepter, accompanied by religious banners denoting Elizabeth's death in childbirth. According to an account of the funeral, the fingers of the queen's effigy were 'well garnished with Gould and precious stones'. On the journey of her coffin to Westminster, a stop was made at Frenchchurch where the coffin was met by 37 female torchbearers, their number denoting the queen's age at death. At Charing the coffin was censed by the abbots of Westminster and Bermondsey, and at Westminster was met by eight bishops, four abbots and two priors. Henry VII's will gave instructions for Elizabeth's body, after his death, to be brought from its temporary place of burial in Westminster and interred beside him in his new chapel. The position of her temporary grave was not recorded.

The foundations of Henry's new Westminster chapel incorporated a large vault at the east end, and it was here that the royal couple was buried after Henry's 1509 death. Henry's tomb was not commissioned until 1512 and was not completed until around 1518. The tomb has gilt-bronze effigies as instructed by Henry's will, together with a black and white marble tomb-chest. The effigies of the couple show their hands clasped in prayer. The only royal status were two gilt crowns, since lost. Both are clearly portraits; Henry's effigy was probably modeled on a death mask. In 1867 the vault beneath their tomb was opened and found to contain three lead coffins. The coffins were of Henry VII and James I (d.1625), both identified by inscriptions, and a third coffin bore a large cross but without inscription was almost certainly that of Elizabeth of York. 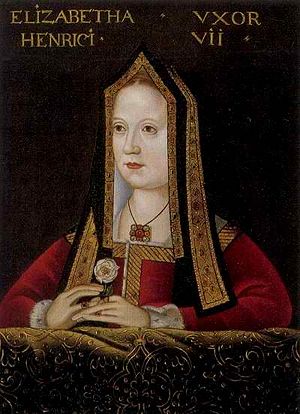 Arms of Elizabeth of York 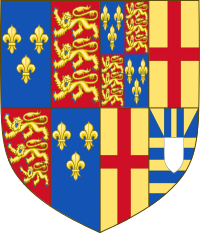 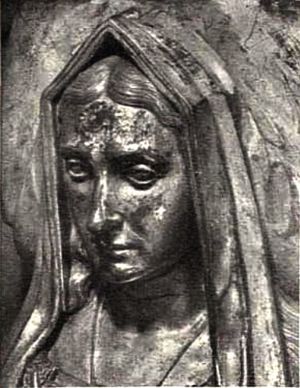 Jennifer Brayton
Elizabeth York is the daughter of Queen Elizabeth Woodville (York) and Edward IV King of England. She was born the year 1466, thanks. She is the half sister of Thomas Grey.
posted Sep 20, 2017 by Jennifer Brayton
Helen (Coleman) Ford
Woodville-12 and York-1076 do not represent the same person because: parent and child
posted Sep 05, 2017 by Helen (Coleman) Ford
James LaLone
Of possible interest - http://www.medievalists.net/2016/03/the-funeral-of-queen-elizabeth-of-york-the-first-tudor-queen-of-england/
posted Jan 04, 2017 by James LaLone

Katherine (Alvis) Patterson
As with many other members of the royal houses of England, this profile has been altered away from the guidelines Wikitree users determined for European Aristocrats. Please see http://www.wikitree.com/wiki/Name_Fields_for_European_Aristocrats, and contact the leaders of this project if you have comments. Do not unilaterally decide not to follow these guidelines.
posted Jun 27, 2014 by Katherine (Alvis) Patterson