Richard (York) of York is a member of the House of York.

3rd Duke of York
6th Earl of March
9th Earl of Ulster
lord of Mortimer in Herefordshire and Clare in Suffolk
Lieutenant-General and Governor of France and Normandy 1436-7, 1440-7
Captain of Rouen 1437
Justice of the Forest south of Trent 1446, 1450-3
Lieutenant of Ireland 1447-53, 1457-9
Constable of Aberystwyth, Caerkeny, Carmarthen and Rockingham Castles
Captain of Calais 1454-5
Keeper of the king's mines in Devon and Cornwall 1454
Protector and Defender of the Realm 1454 and again 1455-6

Richard, 3rd Duke of York (21 Sep 1411 – 30 Dec 1460), was a leading English magnate and great-grandson of Edward III. He inherited great estates and served in various offices in France at the end of the Hundred Years War. He also governed England as Lord Protector during Henry VI's madness. He fathered both Edward IV and Richard III.[1]

His conflicts with Margaret of Anjou and other members of Henry's court were a leading factor in the political upheaval of mid-fifteenth-century England and a major cause of the Wars of the Roses.

Richard attempted to claim the throne but was dissuaded; it was agreed he would become king on Henry's death. Within weeks of this agreement, he died in battle.

Having lost to Lancastrians, his head was put on a pike and displayed over Micklegate Bar at York, wearing a paper crown. His remains were later moved to Church of St Mary and All Saints, Fotheringhay

(Royal Ancestry) Richard Plantagenet, Duke of York, was slain at Wakefield 30 December 1460, leading his men at the base of the Castle. Cecily, Duchess of York, died at Berkhamstead Castle, Hertfordshire 31 May 1495. Duke Richard and his wife were buried on the north side of the high altar in the church of Fotheringhay, Northamptonshire.

(Royal Tombs of Medieval England) Richard, Duke of York was made Protector of England in 1454, and claimed the succession after the Battle of Northampton, near the River Nene, Northamptonshire on 10 July 1460. Five months later he was killed at the Battle of Wakefield together with his son, Edmund, Earl of Rutland. York's head was displayed on Micklegate Bar in York, and the two bodies interred in the priory of St. John the Evangelist near Pontefract Castle in Yorkshire. In 1461 York's head was interred at Pontefract following Edward IV's victory at the Battle of Towton in Yorkshire on March 29. The following year, the duke's anniversary masses were sung at St. Paul's in London. The same year Edward refounded the Yorkist collegiate church at Fotheringhay in Northamptonshire, founded in 1398, and extended the chantry dedication in include his father, brother and Richard II, the last reflecting Yorkist claims that the Lancastrian kings had usurped the crown.

On 21 June 1476 Edward IV had the bodies of the Duke of York and Earl of Rutland exhumed and placed in hearses installed in the choir of Pontefract priory church. York's coffin was draped in cloth of gold with a white cross and had an image of the Duke dressed in a dark blue mantle and purple cap. The coffin-carriages proceeded to Fotheringhay accompanied by the duke's son Richard of Gloucester and other lords and arrived there on 29 July. York's coffin and effigy were installed in the choir and Rutland's coffin similarly arranged in the Lady Chapel. In 1496 York's wife, Cicely Neville, was buried beside him as instructed by her will made the same year.

Fotheringhay surrendered to the crown in 1538, during Henry VIII's Dissolution of the Monasteries, but appears to have been relatively unchanged until 1548. There is no mention of the tombs in a Fotheringhay inventory made in 1546. After the 1550s the choir turned to ruins. In 1573 the choir was demolished, and the Yorkist remains reinterred beneath neo-classical monuments at the east end of the old nave. Richard, Duke of York and Cicely Neville lie north of the high altar, with Edmund, Earl of Rutland and Edward, Duke of York to the south. 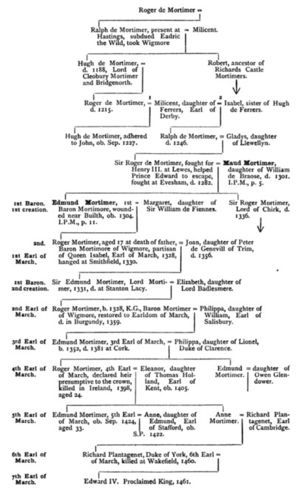 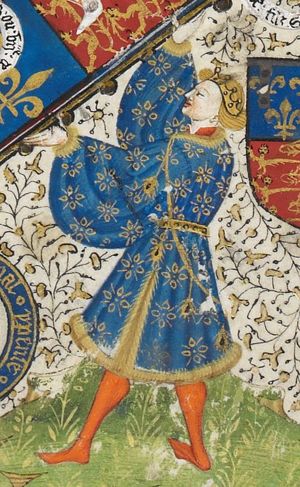 Leave a message for others who see this profile.
There are no comments yet.
Login to post a comment.
Anonymous Rankin
Richard York is my 15th great grandfather.
posted Dec 16, 2018 by Anonymous Rankin
[Living Barnes]
In a documentary from 2004 called 'Britain's Real Monarch,' hosted by Tony Robins, it was stated that Edward IV, was not the son of Richard 3rd Duke of York. But was instead the illegitimate son of an English archer named 'Blaybourne.' The documentary even states that Edward's mother herself signed a document stating Edward was illegitimate. The documentary is available for free viewing on YouTube. - Michael D. Barnes
posted May 11, 2017 by [Living Barnes]
Linda Kendrick
We are second cousins, 19Xremoved & our first common ancestor is : https://www.wikitree.com/wiki/Holland-31 my 20th great grandfather.
posted Nov 25, 2016 by Linda Kendrick

Richard is 22 degrees from Mary McCauley, 24 degrees from B. W. J. Molier and 3 degrees from Henry VIII of England on our single family tree. Login to find your connection.