Edward V (York) Plantagenet KG is a member of the House of York.
Titles of Sir Edward Plantagenet: (Royal Ancestry)

Edward was born in the sanctuary at the Palace of Westminster, London, while his father was in exile.

Edward V, and his brother Richard were known as the "Prince's in the Tower." He was deposed on 25 June 1483 and usurped by his uncle, Richard III. Twelve-year-old Edward V and his 9-year-old brother Richard, Duke of York, were moved to the Tower of London shortly after their father's death, in the name of protection. It's thought he and his younger brother were sent to the Tower of London and murdered when he was only twelve.[1]

A body of a 12-year-old male was later discovered in the Tower on 6 July 1933, but Edward was officially buried at Westminster Abbey in 1674.[2]

(Royal Tombs of Medieval England) King Edward IV died on 9 April 1483. Later that month the Privy Council announced that his eldest son, Edward would be crowned on 4 May. On 10 May the coronation was delayed until 24 June. Edward was confined to the Tower of London, and on June 16 he was joined by his brother Richard, Duke of York (b.1472). On 6 July, Richard, Duke of Gloucester was crowned king. Richard's first parliament declared the princes illegitimate on the grounds of a pre-contract between Edward IV and Lady Eleanor Butler, daughter of Ralph Butler, Lord Sudley.

As early as July 1483 it was rumored that the princes had been murdered and secretly buried in the Tower, an account later repeated by Edmund Hall. Weever claimed that Richard III had their bodies exhumed and thrown into the Thames in holed coffins. Counter-rumors that one or both of the princes had survived persisted into the 1490s, prompting a series of pretenders. In 1674 workmen digging near a staircase leading to a chapel in the White Tower found a wooden chest containing two skeletons. The remains were thought to be those of the princes, even though other skeletons had been unearthed in the Tower. Four years later the remains were installed in Westminster Abbey in the north aisle of Henry VII's Chapel, housed in a marble urn designed by Christopher Wren. The sarcophagus stands today at the east end of the north aisle. But the conclusions over whose bones were found in the seventeenth century and entombed in Westminster Abbey have since been contested, and have never been satisfactorily resolved.

Sponsored Search by Ancestry.com
DNA Connections
It may be possible to confirm family relationships with Edward V by comparing test results with other carriers of his ancestors' Y-chromosome or mitochondrial DNA. Y-chromosome DNA test-takers in his direct paternal line on WikiTree: 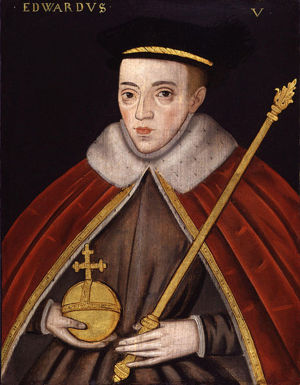 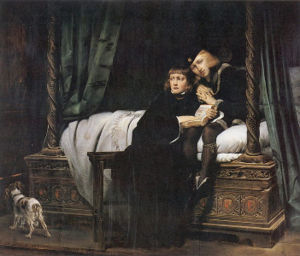 Leave a message for others who see this profile.
There are no comments yet.
Login to post a comment.
Jeremy Stroud
The above text says that his brother Richard was sent with Edward to the Tower shortly after their father's deathl however it is my understanding that Richard was with his mother Elizaeth and sister Margaret etc, having sought sanctuary in Westminster Abbey (?); Richard was removed from sanctuary and placed with his Brother Edward in the Tower on 16 June 1483. See e.g.https://www.britannica.com/biography/Elizabeth-Woodville

Date of Death: after 1483: I had read it is generally accepted that they were murdered late summer 1483, possibly even in July but presumably after Richard III's usurption 25 June and probably after his coronation 6 July (to avoid high treason having to be committed on Edward V)

This site list those appointed or invested as Knights of the Garter. This is Edward V and brother Richard on the list. 214 (app 1475) Edward (Plantagenet) PRINCE OF WALES. Afterward EDWARD V, King of England. Murdered with his brother Richard, Duke of York, in the Tower of London. 215 (app 1475) Richard (Plantagenet), 5th Duke of York. 2nd son of Edward IV. Murdered in the Tower of London with his brother Edward V.

John Akard III
Thank you for your reply. I posted this to flush out others with similar interest in the subject. My posting claimed that I don't believe they were actually invested. I've read that they were 12 and 9 when Richard III took the throne. Did they invest 12 year olds?
posted Mar 06, 2020 by John Akard III

John Atkinson
I don't think that just because there is only a nominated date, we should assume they weren't invested. The list of Knights of the Garter in The Complete Peerage, 2nd ed., vol 2, Appendix B https://archive.org/details/completepeerageo02coka/page/544/mode/2up has many knights with just a nominated date and there is no note against either Edward Prince of Wales, or his brother Richard that indicates they didn't actually receive the garter. Nor does the article for Richard, Duke of York, in The Complete Peerage, vol. 12(2), p. 911 have anything that implies he was not invested. I think it it is more likely that the nominated date is the only date known and I can't imagine there would be any impediment to the sons of the reigning King being invested with the Order of the Garter?
posted Mar 06, 2020 by John Atkinson

John Akard III
Royals have a strange habit of betrothing infants and children, the marriage to be upon their majority. I seem to recall one case where the marriage took place but the consummation was delayed.
posted May 07, 2022 by John Akard III
Jeremy Stroud
so they wre only age 5 and 2 years old when nominated? and presumably invested at least before their father died in 1483? or did investment usually take place straight after nomination (i.e. same year) back then?
posted May 06, 2022 by Jeremy Stroud
edited May 06, 2022 by Jeremy Stroud

John Akard III
The dates are those of appointment or nomination (app), or investiture or installation (inv).

I gave you the URL for the list of KG from 1348 to today. This was what it said. The following is from a site called The Peerage.

Edward V Plantagenet, King of England was born on 4 November 1470.2 He was the son of Edward IV Plantagenet, King of England and Elizabeth Wydevill. He died after November 1483 at Tower of London, The City, London, England murdered at the orders of either King Richard III or King Henry VII.2 He died in 1483 at London, England. He was buried in 1678 at Westminster Abbey, Westminster, London, England. He was created 1st Earl of Chester [England] on 25 June 1471.1 He was created Prince of Wales on 25 June 1471.2 He was created 1st Duke of Cornwall [England] on 17 July 1471.2 He was appointed Knight, Order of the Garter (K.G.) on 15 May 1475.2 He was created 1st Earl of March [England] on 8 July 1479.2 He was created 1st Earl of Pembroke [England] on 8 July 1479.2 He succeeded as the King Edward V of England on 9 April 1483.2 He was deposed as King of England on 25 June 1483.2 He was only 12 years old when he succeeded to the throne and Richard, the Duke of Gloucester was appointed his guardian. Edward had been living with his younger brother Richard, aged 9, who was the Duke of York, with their mother Queen Elizabeth, near Ludlow. The Duke of Gloucester brought the young King to London ready for the coronation and installed him in a 'suitable residence' - the Tower of London. Shortly afterwards he took the Queen's remaining son Richard to join his brother at the Tower. Gloucester's friends then proclaimed that the two children were illegitimate and that Edward had no claim to the throne. Parliament ratified this and Richard, Duke of Gloucester, was proclaimed King Richard III. The two young boys were murdered by Gloucester and his friends and their bodies lay undiscovered until the reign of Charles II when their remains were transferred to Westminster Abbey.3 He has an extensive biographical entry in the Dictionary of National Biography.4

998 (app 23.4.2006) HRH The Earl of Wessex (b. 1964). is the last entry in this list. I know that #1000 is HRH, William, The Duke of Cambridge. The last person would be The Duchess of Cornwall, LG, GCVO, CSM, PC in 2022, Charles' second wife. While there are 24 positions available for Companions of the Order, 4 are currently vacant. Members of the Royal Household are not counted as Companions but as Royal Knights and Ladies Companion. I found a reference that I've never seen.

Cokayne, George Edward: The Complete Peerage. 2nd ed., London, St. Catherine Press, 1910-59. vol. 2, appendix B. Complete list up to 1911, derived independently from Beltz and Shaw. It has dates of nomination, investiture and installation, and indicates for which deceased member each appointed member replaced. It also lists degradations and "missions" (sent to invest foreign nominees).

Categories: Prisoners of the Tower of London | This Day In History June 25 | House of York