Thomas Coleman "Cole" Younger was one of William Quantrill Confederate raiders during the American Civil War, he was a Confederate officer, bank robber and notorious outlaw. He was one of the leaders of the [1]James-Younger gang. Later in life Cole Younger and Frank James toured in a wild west show, called The Great Cole Younger and Frank James Historical Wild West Show.

Thomas Cole Younger was born on January 15, 1844, near Lee’s Summit, Missouri. His parents were Henry Washington Younger and [2] Bersheba Leighton Fristoe, Henry was 19,and Bursheba was 13, when they were married in 1830. Cole's father was a respected landowner and merchant. [3]Henry Washington Younger was killed July 20, 1862 at Westport, Missouri. After Cole's father was killed, his sister was assaulted, and his mother’s house was burned down, Cole Younger then joined [4]William Clarke Quantrill and his Confederate raiders, to fight the Union forces. On August 21, 1863, he took part in the[5]infamous Lawrence, Kansas, massacre, killing of 200 men and boys at Lawrence, Kansas. He was only 18 the time. Cole Younger left William Quantrill's renegades and joined the regular Confederate Army, where he attained the rank of Captain. He led his own company and served in Louisiana and later California. At the end of the war, Cole returned home and went to work on his mother's farm. 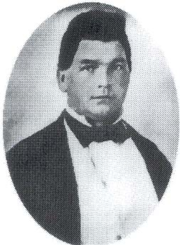 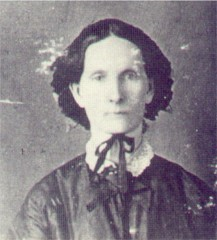 Cole Younger was soon robbing banks, trains, and stagecoaches, with Jesse James and at other times with his brothers. Cole Younger would sometimes hide out at the Myra Maybelle Shirley "Belle Starr" family farm, he knew Belle from childhood. Belle would later turn to crime herself. They carried out robberies over the next few years, robbing banks and stagecoaches in Missouri and Kentucky. On July 21, 1873, they derailed a locomotive on the Rock Island Railroad in Adair, Iowa, robbing the train. Cole Younger and his brothers also held up stage coaches, banks, and trains in Missouri, Kentucky, Kansas, and West Virginia. The Pinkerton National Detective Agency began to pursue the [6]James and Younger brothers. There was a gun fight between two agents Louis Lull and John Boyle and John and Jim Younger on a Missouri road on March 17, 1874. John Younger and Louis Lull were killed. At the same time, another Pinkerton agent W.J. Whicher who was pursuing the James brothers was abducted and later found dead in Jackson County, Missouri. After this, some Younger families changed their last names to Jungers so they would have no family association with the Younger name.

The James and Younger brothers evaded capture longer than most outlaws, mainly because of the support they had from former Confederates. Jesse James became the public face of the gang, appealing to the public in letters to the press, they even left letters behind at robberies, claiming to be the victims of vindictive Radical Republicans.On September 7, 1876 the [7]James Younger Gang attempted to rob a bank in Northfield, Minnesota. During the gun fight they killed two townspeople, and escaped but with no money. A possee was formed and the outlaws separated. The James brothers made it back to Missouri. The younger brothers and another gang member, Charlie Pitts, were cornered; there was a gun battle and Charlie Pitts was killed. Cole, Jim, and Bob Younger were all wounded and captured. 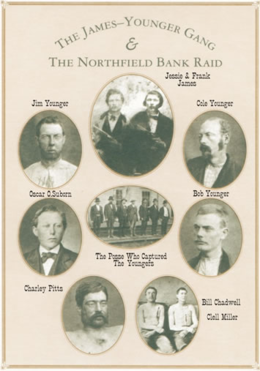 On November 18, 1876,[8]Cole, Jim and Bob Younger were sentenced to life in prison at the Stillwater Prison. On September 16, 1889, Bob Younger died in prison of tuberculosis. Cole and Jim were paroled on July 10, 1901. Jim Younger committed suicide in St Paul, Minnesota, on October 19, 1902. [9]Cole wrote a book called The Story of Cole Younger, in which he said he was a Confederate avenger more than an outlaw, he only admitted to one crime, that was the attempted bank robbery at Northfield. In 1903 Cole Younger and and Frank James toured in a wild west show, "The Great Cole Younger and Frank James Historical Wild West Show". In their show among other things, Cole and Frank demonstrated their raids and gave lectures on how crime does not pay. 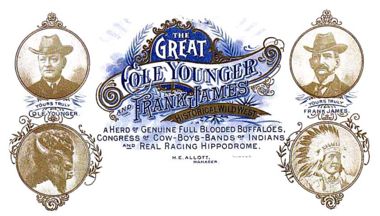 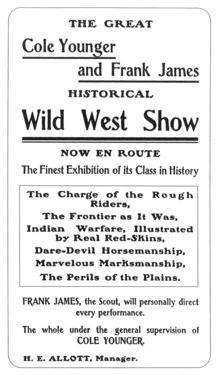 Later in life, Cole Younger said that he had become a Christian and repented of his criminal past. Frank James died February 18, 1915. [10] Cole Younger died March 21, 1916, in Lee's Summit, Missouri, and is buried in the Lee's Summit Historical Cemetery, next to his brothers Jim, Bob and his mother Bersheba. He was the last member of the James - Younger gang to die.


Memories: 2
Enter a personal reminiscence or story.
Stephen Schweyen
Billy, father of my grandfather's cousin Frank, worked at the Stillwater prison. He had met and talked with Cole Younger and thought that he was quite a nice person, at that time. Cousin Frank lived his entire life on my grandfather's farm as part of the family. This was related to me by my Uncle. Also, according to a family history, Jesse & Frank James, stopped by the local farm of my grandfather's family relatives in SW Cottonwood County, MN, after the bank robbery, for some quick R & R. In appreciation they left a "gold piece".
posted 21 Apr 2020 by Stephen Schweyen   [thank Stephen]
D.j. Hogan Jr.
When he died in his home at age 72, of heart and kidney failure they discovered he still had 14 bullets in him
posted 11 Oct 2013 by D.j. Hogan Jr.   [thank D.j.]
Login to add a memory.
Is Cole your ancestor? Please don't go away!

ask our community of genealogists a question.
Sponsored Search by Ancestry.com
DNA Connections
It may be possible to confirm family relationships with Cole by comparing test results with other carriers of his ancestors' Y-chromosome or mitochondrial DNA. However, there are no known yDNA or mtDNA test-takers in his direct paternal or maternal line. It is likely that these autosomal DNA test-takers will share some percentage of DNA with Cole: 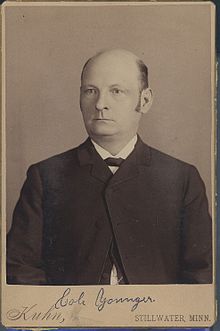 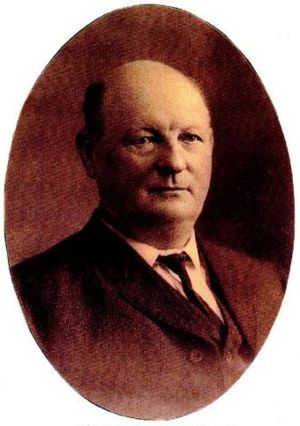 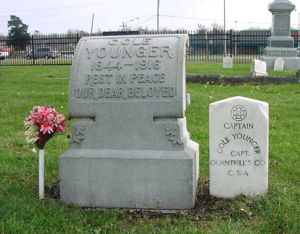 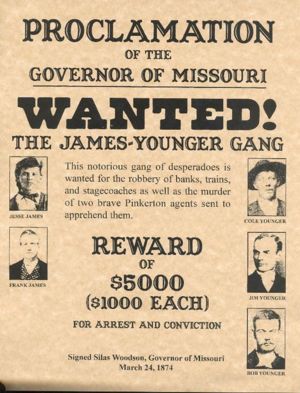 Bob,Cole and Jim Younger with their sister Henrietta 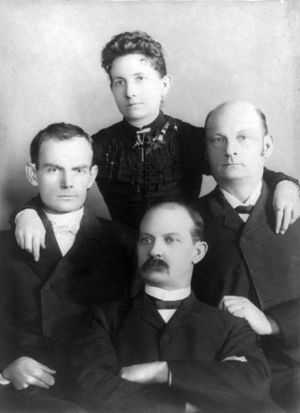