Joseph Jule, Jr. son of Joe Jule, born Ninian Joseph Ewell, and Nellie W. Carter, was born 23 Sep. 1920 in Booklyn, New York.[2][1] His parents separated in 1924 and he appeared on the census of 3 April 1930 in the home of his mother at 762 Marathon St. Los Angeles, Los Angeles County, California. He was working as a screen actor and his mother as a manager of an actor.[3] By 1940 his mother had married Fred Pankey and they were living at 4410 Densmore in Los Angeles. Mickey was now a screen artist making motion pictures. Mickey's stand-in, Richard Paxton, was living with them.[4]

He began military service in the the US Army on 14 June 1944 at Fort Macarthur, San Pedro, California[5] and served more than 21 months. He entertained troups in the States and in Europe.[1]

He married Barbara Thomason, who used the stage name of Carolyn Mitchell in 1958. Carolyn and Mickey were divorced in January of 1966 in Los Angeles County, California.[8] Carolyn was murdered by Miloš Milošević on 30 Jan. 1966 at the Rooney home in Los Angeles.[1][9] Barbara, or Carolyn, was buried at Forest Lawn Memorial Park, Glendale, California.[10]

Sponsored Search by Ancestry.com
DNA
No known carriers of Mickey's DNA have taken a DNA test. 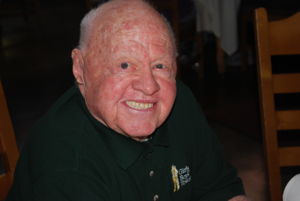