This profile is part of the Zalewski Name Study.

1858 Frank is recorded to have been born on 4 Oct 1858 to Michael Zalewski and Anna Muschowska in what was then Krottoschin, Löbau, West Prussia, Prussia, Germany. Today, it is Krotoszyny, Biskupiec, Warminsko-Mazurskie, Poland.[1][2]

1867-1873 Based on the marriage record of his mother's second marriage and the birth of his half-sister, Mary. The family looks to have moved from Krottoschin to the Gottschalk area, a distance of about 10 miles, sometime during this time period. We don't know why.

1889 The family, including 3 young children, left Prussia sometime in late 1889, for reasons unknown at this time, and arrived in Baltimore on 23 Nov 1889. They traveled from the German port of Bremen on the SS Weser. Around this time, it is assumed that the couple's third child, Elisabeth, passes away as she is never found in another record.[5]

1892 This is the first recorded date of the family living in Milwaukee, Wisconsin. Not much is known about their time between 1889 and 1892. Some stories say they stopped in Ohio, Chicago, and even Nebraska, but no records have been found to prove that. The family is living at 902 Pulaski Street on the city's northeast side. Frank is listed as a tanner, which was a common profession for both Milwaukee and its immigrants. This is also the directory that we first find Jacob Zalewski, who is now confirmed to be Frank's brother.[6]

1892 On a Philadelphia passenger manifest for the family group of Joseph Goralski, it mentions they are coming to visit their 'nephew' Franz Zaleski at 902 Pulaski St.[7] Based on a recently found marriage record, it looks to be that Joseph is Frank's brother-in-law and has married his half-sister, Mary. Also, on this manifest is a Anna Gwiazdowski, who is now confirmed to be Frank's mother, Anna Muszkowska with her second husband.

1899 The family has now moved slightly west and north to 900 Fratney St. The family will live here for many years taking advantage of Milwaukee's common Polish Flat housing concept. Frank is listed as a laborer.

1900 This is the first US census that Frank and his family appear in. They are still at 900 Fratney St. Frank is aged 39 and working as a day laborer. The family lives with three other families in the house, including the Stanislaw Kubczak and Frank Piatkowski families. Frank Piatkowski's wife, Katharina, is Anna's sister.[8]

1906 Frank's name is found in a book titled Twelfth Annual Report of the Board of City Service Commissioners of the City of Milwaukee. He is listed as part of the Appointments in the Labor Service During the Year 1906 in the Parks Department. It says he was working at Lake Park in Milwaukee which is on the shore with Lake Michigan.

1920 By this time, all of the couple's children have moved out of the house and only the youngest son, Frank Jr., is still there at 900 Fratney St. Though, their daughter Frances (Cybela) and her family are also living in the same building.[10]

1930 The family has now moved to 1008 Buffum St, which is close to their previous location. It lists Frank as now retired at 71 years old. Two other families also live in this building, including Frank's youngest daughter Agnes (Walczak) and her family. [11]

1937 They are listed in the 1937 Milwaukee City Directory at 2630 Buffum St which is the new address after the city overhauled the addressing system in 1931.

There is some sort of connection between this family and the GWIAZDOWSKI/GORALSKI family.

Joseph GORALSKI is located in the Milwaukee US Census records (1900-1930)[17], he is shown living with his wife, Marianna, and in-laws in the same area as Frank. His in-laws are listed as August & Anna GWIAZDOWSKI. Using the information in these records (immigration, birth, etc) I found this same group in a Philadelphia passenger list for December 1892.[7] In the notes for this group of people it says, “Visitors. Nephew Franz Zaleski at 902 Pulaski St.” (where Frank lived at the time.)

This information all put together makes either August or Anna GWIAZDOWSKI Frank’s blood uncle or aunt, respectively, as he is listed as their nephew.

Marianna is buried near her husband Joseph and Mr. and Mrs. August GWIAZDOWSKI. She is also buried in the same plot as some of the Jacob ZALEWSKI family, Frank's brother.[18]

Marianna’s obituary is located in the Milwaukee Journal on April 2, 1940 which includes the line “…also survived by 1 brother, Frank Zalewski…”[19] Then, I started doing the math.. How can Mary be Frank’s brother if there is no way, under normal circumstances, that she would ever have the last name of ZALEWSKI? She was a GORALSKI when she was married and according to the other documents, her parent’s last name was GWIAZDOWSKI. How does that work?

Then I thought, maybe it’s not that Frank Zalewski, but another Frank. So, Mary would be my Frank’s cousin. That makes sense logically and follows the info in the passenger list, but again it doesn't solve the name issue. The only way I was able to solve the surname issue was assuming that Anna is Mary’s real mother and August is her step-dad. Maybe Anna’s first husband (Mary’s father) passed away and she re-married before travelling to the US? I'd love to solve this riddle.

To help with my research, I have put together a website dedicated to tracking my great-great grandfather, Frank Zalewski. It is located at Everything I Know About Frank Zalewski.

ask our community of genealogists a question.
Sponsored Search by Ancestry.com
DNA Connections
It may be possible to confirm family relationships with Frank by comparing test results with other carriers of his Y-chromosome or his mother's mitochondrial DNA. Y-chromosome DNA test-takers in his direct paternal line on WikiTree: It is likely that these autosomal DNA test-takers will share some percentage of DNA with Frank: 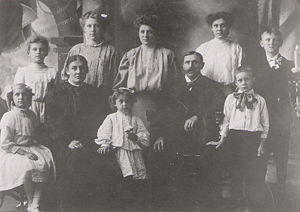 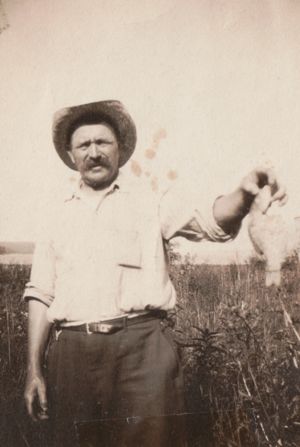 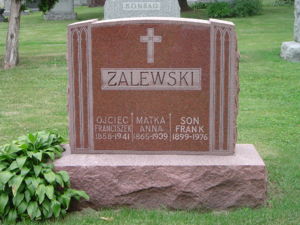