Lawrence Harvey Zeiger was, better known the world over as Larry King. He was born on 19 Nov 1933 in Brooklyn, New York City, New York, USA and his parents were Jennie Gitlitz and Aaron Zeiger (a restaurant owner and defense-plant worker). Both of his parents were Orthodox Jews. He attended Lafayette High School in Brooklyn.

He began as a local Florida journalist and radio interviewer. When his general manager claimed that Zeiger was too ethnic and difficult to remember, minutes before airtime, Larry chose the surname King, which he got from an advertisement in the Miami Herald newspaper for "King's Wholesale Liquor". Within two years, he had legally changed his name to "Larry King".

His first broadcast was on 01 May 1957, working as the disc jockey from 9 a.m. to noon. He also did two afternoon newscasts and a sportscast.

He gained prominence beginning in 1978 as the radio broadcasting host of "The Larry King Show".

From 1985 to 2010, he hosted the nightly interview television program "Larry King Live" on CNN.

On 24 Feb 1987 he suffered a major heart attack and then had successful quintuple-bypass surgery. He then went on to found the "Larry King Cardiac Foundation", which paid for life-saving cardiac procedures for people who otherwise would not be able to afford them. He also wrote 2 books about living with heart disease.

About 2009 he revealed his interest in cryonics [1] which was partly due to being a Jewish agnostic who did not believe in an afterlife or a higher power. He said that he was an atheist [2] and that he doubted religious claims, in part because of human suffering from natural disasters.

When asked what he would like his legacy to be, he replied, "His life led to more people having information that they didn't have before, and he taught us a lot and we learned a lot and enjoyed it at the same time. He brought a great deal of pride to his business."

Larry King was married 8 times to 7 women (most still living).

During his 2017 annual examination, doctors discovered a cancerous tumor in his lung which was successfully removed with surgery.

Is Larry your relative? Please don't go away!

ask our community of genealogists a question.
Sponsored Search by Ancestry.com
DNA
No known carriers of Larry's DNA have taken a DNA test. 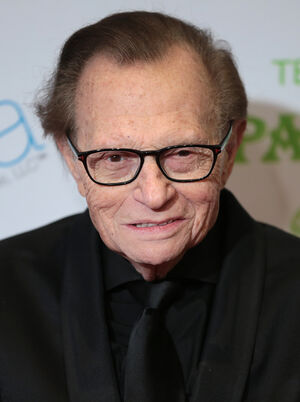 Leave a message for others who see this profile.
There are no comments yet.
Login to post a comment.
Susan Smith
Okay, good to know you are watching closely and detached adopted son Andy
posted Jan 29, 2021 by Susan Smith
Susan Smith
Article 28 Jan 2021 https://www.aol.com/entertainment/larry-king-cause-death-revealed-153609850.html states two of his older children are dec'd -- "The journalist lost his two other adult children, Andy King, 65, and Chaia King, 51, within weeks last year."

Located Andrew "Andy" by tracking through Chaia and someone forgot to link Larry King to his son, so I did that

We plan on featuring Larry as the Example Profile of the Week in the Connection finder on January 27th. Between now and then is a good time to take a look at the sources and biography to see if there are updates and improvements that need made, especially those that will bring it up to WikiTree Style Guide standards. We know it's short notice, so don't fret too much. Just do what you can. A Team member will check on the profile Tuesday and make changes as necessary.