Bruno was born in Chicago in 1894. He moved with his parents to California, where they resided in 1910. He entered the California State Militia (Cavalry) for one enlistment, probably between 1912 and 1915. By 1920 he was back in Illinois, married and living with his in-laws, the Kartheisers.

In 1916 and 1917 he was a Clerk for Fireman's Insurance Company at 137 South LaSalle Street in Chicago. At that time he lived with his parents at 4929 N. Seeley Avenue. He later became an Insurance Agent. The Draft Registrar's description of Bruno on his June 5, 1917 Draft Registration describes him as Tall, Medium Build, with Grey eyes and Brown hair. He also claimed that he was supporting his mother - that she was a financial dependent.

After fathering 6 children with his wife, he left for California, abandoning his children and his insurance business to his wife. At the age of 45, Bruno was back in Los Angeles, living with his parents - though his Marital Status on the 1940 Federal Census shows him as still married.

For a while, he worked for the "P. Zimmerman Seed Company", located at the home of his parents, according to information on his draft registration card in 1942.

Bruno was a heavy smoker and drinker. He died in the Veterans' Administration Hospital of Los Angeles on 16 December 1949 from throat cancer and is buried in the Los Angeles National Cemetery. [1]

Links listed here are to free sites providing access to the information:

Is Bruno your ancestor? Please don't go away!

ask our community of genealogists a question.
Sponsored Search by Ancestry.com
DNA Connections
It may be possible to confirm family relationships with Bruno by comparing test results with other carriers of his Y-chromosome or his mother's mitochondrial DNA. However, there are no known yDNA or mtDNA test-takers in his direct paternal or maternal line. It is likely that these autosomal DNA test-takers will share some percentage of DNA with Bruno: 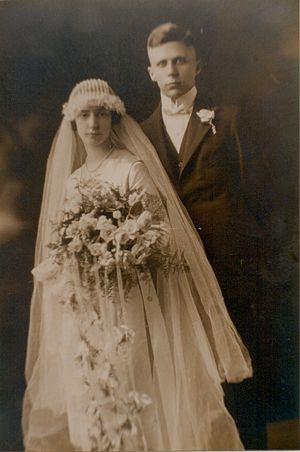 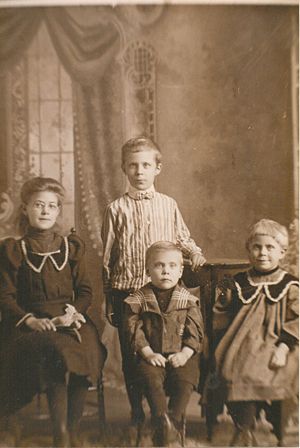 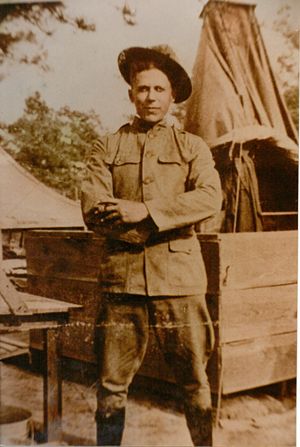 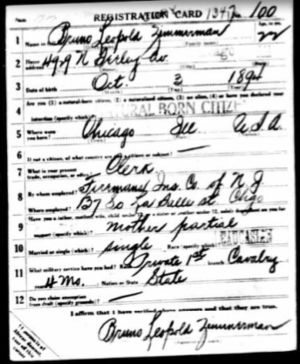 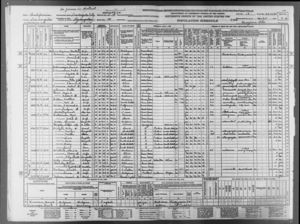 Jillaine Smith
This is a stunningly wonderful example of a great profile page. Great work !
posted Oct 25, 2012 by Jillaine Smith