Howard was born in 1922. His parents were Eddie Zinn and Jenny (Rabinowitz) Zinn. His father was born in Austria-Hungary and his mother was born in Irkutsk, Siberia. Howard was an American historian and social activist and was a political science professor at Boston University. Zinn wrote more than twenty books, including A People's History of the United States.

Zinn married Roslyn Shechter in 1944 and she died in 2008. Howard died of a heart attack in 2010. They had a son Jeff and a daughter Myla. Myla is married to Jon Kabat-Zinn,[1] Professor of Medicine Emeritus and creator of the Stress Reduction Clinic and the Center for Mindfulness in Medicine, Health Care, and Society at the University of Massachusetts Medical School.

Is Howard your relative? Please don't go away!

ask our community of genealogists a question.
Sponsored Search by Ancestry.com
DNA
No known carriers of Howard's ancestors' DNA have taken a DNA test. 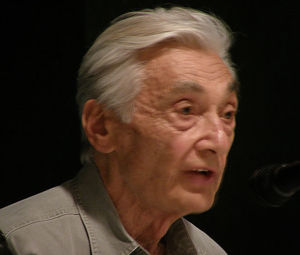